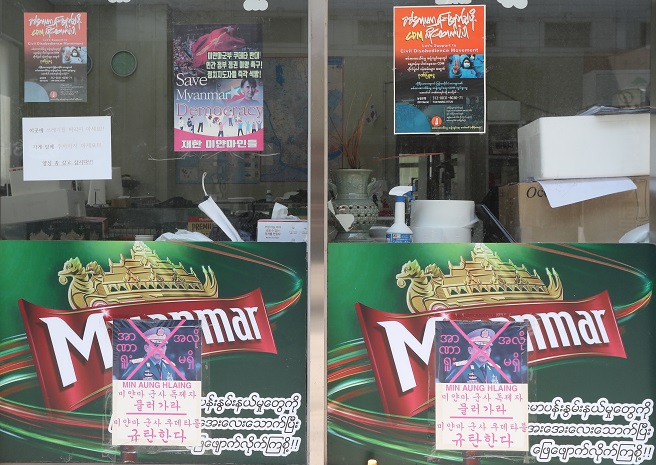 Printed pictures condemning a coup and express support for a democratic movement in Myanmar are posted on the outside of an office near Bupyeong Station in Incheon. (Yonhap)

INCHEON, April 28 (Korea Bizwire) — In the streets near Bupyeong Station in Incheon’s Bupyeong District, just west of Seoul, leaflets are posted on the walls protesting Myanmar’s military coup d’etat in both Burmese and Korean.

The leaflets were easily found at Myanmarese restaurants and food stores in the district.

A local convenience store also put up a banner urging the Myanmarese military to stop the coup d’etat and the slaughtering of its own people.

Bupyeong has become a hub for Myanmar’s democratization movement, taking on the role of a ‘point of contact’ for numerous Myanmarese living in South Korea.

In the last decade, Bupyeong has become home to five Myanmarese Buddhist temples, with numerous vendors and shops that sell Myanmarese food and ingredients.

As of last month, there were 426 foreigners living in Bupyeong District. Following a refugee resettlement program initiated by the Ministry of Justice from 2015 to 2019, most of some 100 refugees from Myanmar settled in Bupyeong.

Now, Bupyeong has become a popular destination for Myanmarese in South Korea, who would come from various parts of the country every weekend to visit the ‘hub’. 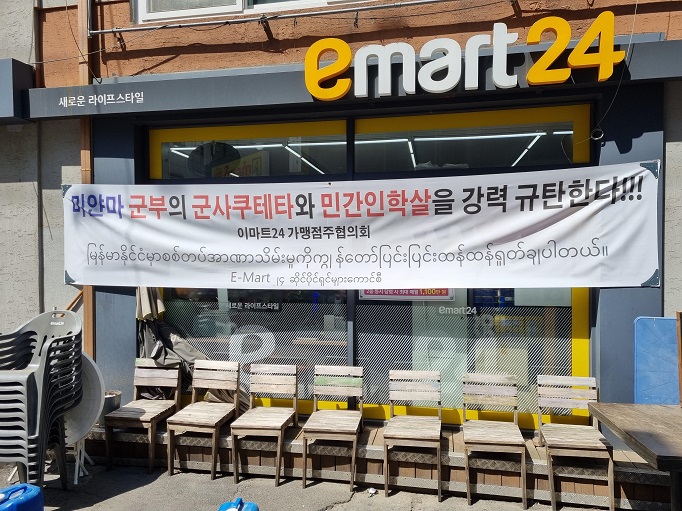 A banner urging the Myanmar military to stop bloody crackdowns on its civilians is hung on the outside of a convenience store near Bupyeong Station in Incheon. (Yonhap)

A ceremony held in support of the establishment of the National Unity Government in opposition to the Myanmarese military was also held in Bupyeong District, in front of the Korean Confederation of Trade Unions Incheon Headquarters, last Sunday.

Numerous students, workers, and activists from Myanmar have gathered in Bupyeong to establish the ‘Committee for the Abolishment of Military Dictatorship in Myanmar,’ engaging in robust activity.

The committee has raised 350 million won (US$314,465) to support public servants and citizens in Myanmar struggling in their fight against the military.

“We are always thankful for South Korea’s active support for Myanmar’s democracy,” the committee said. “Thanks to South Korea, the newly established NUG is counting on us.”

Bupyeong District, upon request from the committee, is holding fundraising events and photo exhibitions.