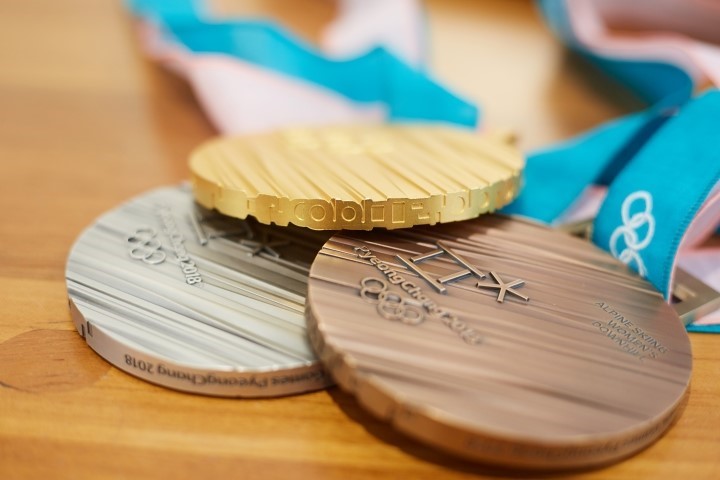 SEOUL, Sept. 21 (Korea Bizwire) — Medals to be awarded at the 2018 PyeongChang Winter Olympics were unveiled Thursday, with the Korean alphabet hangeul as their motif.

Presented at a ceremony simultaneously held at the Metropolitan Museum of Art in New York City with President Moon Jae-in in attendance, gold, silver and bronze medals, designed by local industrial designer Lee Suk-woo, feature hangeul consonants on their bodies.

Those consonants are “ㅍ, ㅊ, ㄷ, ㅇ, ㄱ, ㄹ, ㅁ,” representing the Korean words for the PyeongChang Winter Olympics. They were written and stretched in 3-D and formed together in a cylinder shape.

PyeongChang’s organizing committee said the medals were also inspired by the texture of tree trunks, as trees represent the work put into developing Korean culture and the Olympic Games.

“Hangeul is the foundation and the soul of Korean culture,” PyeongChang’s organizing committee said. “Hangeul is considered the seed that eventually blossoms and bears fruit, which symbolize Korean culture. The trunk is the process of that development.”

The gold medal weighs 586 grams, the silver 580 g and the bronze 493 g. Compared with the previous Winter Games in Sochi, Russia, in 2014, PyeongChang’s gold and silver medals are heavier and bronze medal is lighter.

The gold and silver medals for PyeongChang are 99.9 percent silver, and the gold medal is plated with 6 g of gold. The bronze medal is made of red brass.

PyeongChang said it will create 259 sets of the medals. Of them, 222 of them will be awarded to the medal winners at the Olympics, and five sets will be set aside in case of ties. The International Olympic Committee (IOC) will retain 25 sets for display overseas, and seven other sets will be exhibited in South Korea.

According to PyeongChang, the IOC approved the medals in March and gave positive reviews of their design.

PyeongChang also presented the medal lanyard, which has snowflake patterns embroidered on “Gapsa,” a type of cloth used to make the traditional Korean costume hanbok. Light teal and light red were used in consistency with the look of the 2018 Winter Olympics. The words “PyeongChang 2018″ and the five Olympic rings are embroidered on the Gapsa lanyard.

The curved pattern of the medal case was inspired by the Korean traditional architecture, PyeongChang said.

“Now that the medals have been unveiled, I can really feel that the Olympic Games are fast approaching,” said Lee Hee-beom, head of PyeongChang’s organizing committee. “The medal itself and its lanyard both highlight the traditional beauty of Korea. IOC officials who saw the medals beforehand raved about how refreshing and creative the medals are.”

Lee Suk-woo, the designer of the medals, said he wanted to present Korean traditional aesthetics “in multi-dimensional fashion.”

“I tried some new techniques and went through a lot of trials and errors,” Lee said. “I wanted the medals to represent the hard work and dedication of the athletes. And the finished products came out a lot better than I’d expected.”