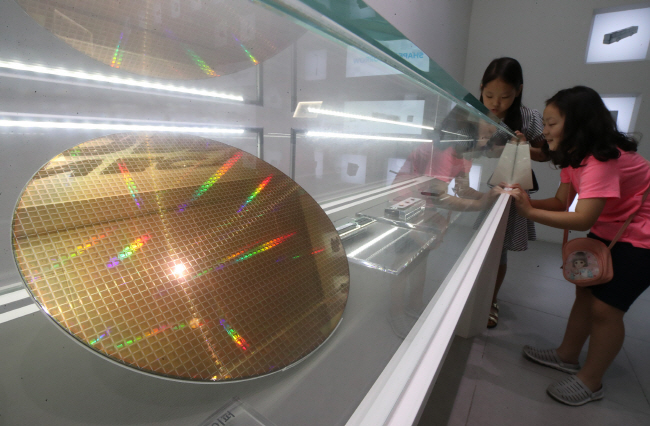 SEOUL, Aug. 2 (Korea Bizwire) — Japan’s expanded export curbs appear to target key pillars and future growth drivers of the South Korean economy, but its move could create mutually damaging situations for the closely intertwined Asian economies, depending on the scope of the measures, industry watchers say.

The Japanese government passed a bill Friday to remove South Korea from a “whitelist” of trusted buyers, citing security concerns, amid a diplomatic standoff over wartime forced laborer compensation issues.

When the new and broad rules go into effect in late August, Japanese exporters will need licenses to export to South Korea of over 1,000 items that can be diverted for military use.

Although the tougher regulations do not ban the affected items, which range from chemicals to machinery, Japan’s latest salvo following its export controls of three key materials is adding to the woes of Korean companies that are already grappling with uncertainties from the drawn-out trade war between the United States and China.

Experts say Japanese Prime Minister Shinzo Abe is aiming an arrow straight at the Achilles heel of South Korea, which has fast risen to become the world’s seventh-largest exporter on the back of a vibrant tech industry, whose supply chain is heavily dependent on Japanese imports.

South Korea’s trade deficit with Japan was $24 billion in 2018, the biggest among more than 250 trade partners, with imports of semiconductor parts and equipment accounting for the highest portion of all items, according to the Korea International Trade Association.

“Rising uncertainties over the potential list of chemicals and parts subject to the new measures are weighing on Korean companies by complicating their business and investment plans,” Kim Byung-yeon, analyst at NH Investment & Securities, said.

While Japan’s export restrictions on three chemicals essential for making chips and displays hasn’t caused major production disruption over the past month with existing stockpiles, Korean companies have been scrambling to get hold of as much of the Japanese products as they can and preparing contingency plans for a broader export regulations.

Samsung Electronics Co., the world’s leading chip and smartphone maker, has been securing stockpiles of three key materials needed for chips and displays, while asking its local partners in the production of televisions, consumer electronics and smartphones to follow suit.

The Korean tech giant has also been testing non-Japanese materials and searching for new suppliers in China, Taiwan and at home to diversify its supply chain, according to sources familiar with the matter,

“Even though the current Japanese measures don’t ban exports of the materials, the new export regulations add burden (on the company), and visibility is low on Japan’s trade measures,” Robert Yi, a Samsung Electronics executive, said in a conference call on Wednesday.

“Company executives are preparing various measures to minimize its negative impact on the company.”

Last week, its smaller chip rival, SK hynix Inc., cautioned that prolonged Japanese measures could negatively affect its semiconductor production, announcing plans to reduce its memory chip output and capital expenditure in the latter half of this year.

LG Display Inc. the world’s largest OLED panel maker, said it is ensuring a stable supply of materials and mulling ways to diversify sources in the long-term. 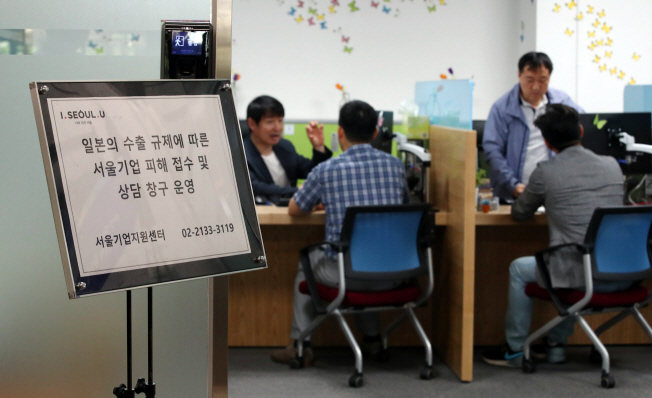 Industry officials worry that under the new restrictions, the Japanese government could drag out the review processes of the licenses so that imports from Japan don’t make it to their destinations on time, choking off the flow of high-tech supplies in the fast-moving tech industry.

Or they could pinpoint certain items in which Japan has a dominant presence and Korean companies are heavily dependent on, which could make it hard to find alternatives.

Although it is not yet clear which items will be most affected by Seoul’s removal from the whitelist, analysts speculate that sectors with strong growth potential, including lithium-ion batteries, carbon fiber and engineering equipment, could be the targets of Japan’s stringent export controls.

Korean battery makers are embracing the potential impact of Japan’s move as they heavily rely on essential Japanese parts for lithium-ion batteries, such as pouch films and separators, that power electric vehicles (EVs).

LG Chem Inc., the nation’s leading chemical firm, said it is preparing for various scenarios following Japan’s expansion of export controls, and its smaller local rival, SK Innovation Co., has reportedly been searching for alternative sources outside of Japan.

While the short-term impact on the Korean side is more palpable, market watchers warned that Japanese companies can also be hit by the shaky trade ties with their Korean buyers, which account for a considerable share of their revenue.

“Japanese companies could also suffer from the complicated export regulations because they will have to find new clients if trade with South Korea becomes unstable,” said Kim Gyu-pan, a researcher at the state-run Korea Institute for International Economic Policy.

“Recent stock price fall in Japanese companies with high exposure to South Korea show the damage on their side.”

While the trade impasse is clouding the prospects of Asia’s fourth-largest economy, it may not be all bad if the country can take the chance to develop its industry to a new level.

Japan’s leveraging of trade as a weapon in diplomatic battles is serving as a wake-up call for Korean policymakers to ramp up support for the nation’s parts and materials sectors to strengthen fundamentals for the high-tech industry.

Last week, the government said it will earmark more than 1 trillion won (US$847 million) in next year’s budget to support companies producing parts and materials, and come up with a long-term roadmap to foster growth in related areas.

Korean chipmakers, which produce over 60 percent of global output, use nearly 80 percent of imported semiconductor equipment and half of materials from abroad, according to the Ministry of Trade, Industry and Energy.

As trade headwinds loom, many are asking the same question: How long can this battle continue before one side or the other starts to suffer grievous economic harm?

Claude Barfield, a researcher at American Enterprise Institute for Public Policy Research, said a prolonged trade row could create a lose-lose situation for the Asian neighbors and hit the global supply chain, while creating unintended consequences and giving breathing room for China.

“Japan has chosen a dangerous and destructive mode of retaliation, one that is likely to greatly disrupt global electronic supply chains and bolster China’s push for 5G wireless dominance,” Barfield wrote in a commentary.