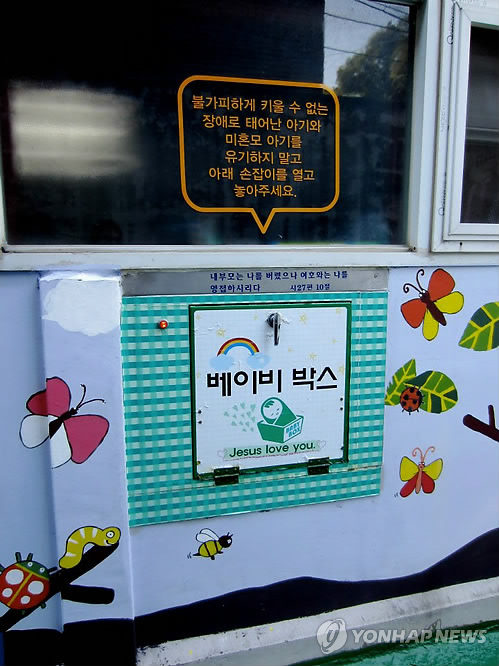 SEOUL, May 4 (Korea Bizwire) – Reverend Lee Jong-rak of Jusarang Community Church set up Korea’s first baby box in Seoul in October 2009 to save the lives of unwanted children. Since its installation, the church has taken in more than 600 newborns.

According to Reverend Lee, as the existence of the baby box became common knowledge due to widespread media coverage, even people from rural areas outside of Seoul have come to his church to drop off their babies, and as many as 250 infants have been abandoned every year.

However, the Reverend doesn’t think that media attention caused the jump in the number of babies being left in the box. Rather, he points to a revision of adoption laws as the cause of the increase.

In August 2012, the Special Act for Adoption was revised to prevent human trafficking, and to make it easier for adoptees to find their biological parents. Under the revision, prior to a baby being put up for adoption, its mother must register the birth. In addition, the procedure now requires court approval, whereas under the previous law, a simple report was sufficient.

As the law mandates birth registration by mothers, many single teenagers, afraid of getting a “scarlet letter” on their record by delivering a child out of marriage, are choosing to abandon their babies.

Last year, a new baby box was installed at New Canaan Church in Gunpo, Gyeonggi Province, and it took in 27 babies in its first year. As of April this year, a total of 94 babies had been left at the two baby boxes.

An official at an orphanage in Gyeoggi province said, “The special law was based on good intentions, but the unfortunate outcome is that it pushes single mothers to abandon their babies.”

Currently, the National Assembly is discussing a revision of the special law to allow fathers of the babies to register them under their names.

In the meantime, controversy over the baby boxes shows no sign of abating. Those who object say that the boxes encourage the abandonment of newborn infants, offering overwhelmed parents an easy way out.

However, those who favor the boxes argue that they can save lives, and blame the systematic problems on social issues. Reverend Lee said, “There is no social infrastructure to help single mothers raise their babies. They have no choice but to stop their studies, and cannot hold stable jobs. How they can raise their babies in such a discriminatory social environment?”

“If single mothers cannot raise their babies well, the government needs to protect them and give them a chance to meet their step-parents. Rather, it is systematically blocking adoption by revising the law,” he added.