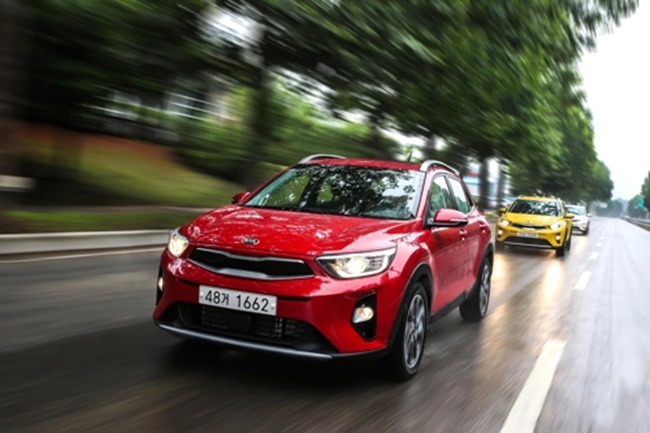 In a mix of urban and expressway driving that took place from western Seoul to Namyangju in Gyeonggi Province, the Stonic subcompact SUV achieved unrivaled mileage numbers while proving to be an excellent performer, well-suited to wooing customers in their 20s and 30s.

After 60 minutes of driving at cruise mode with the speed set at 100 kph, the Stonic’s dashboard showed an average fuel economy of 26 kilometers per liter, which is far higher than the official 17 km/l rated by the government.

As the carmaker plans to launch the Stonic in Europe and other global markets later this year, Kia claimed it closely studied the world’s most fuel-efficient SUVs in the B-segment.

“The models we have studied for the Stonic’s launch are the Renault Captur crossover and Peugeot 2008 SUV,” a Kia official at the company’s product management division told reporters.

Fuel-efficient vehicles are often regarded as less powerful cars, but the 100 horsepower that the Stonic’s 1.6-liter diesel engine generates makes plenty of torque to push the car forward when the driver floors the pedal.

In the course of the drive, safety features such as the lane departure warning and frontal crash avoidance systems were tested and worked as advertised.

When the Stonic got too close to another vehicle on the motorway, warnings sounded automatically and the car slowed down, which helped avoid a collision.

The small crossover also has advanced safety features such as a rear-side collision avoidance system and high beam assist, which are not easily found on rivals like Renault Samsung Motors’ QM3, SsangYong Motor’s Tivoli or GM Korea’s Trax.

The price tag of the car ranges from 19 million won (US$16,700) to 23 million won making it accessible for entry-level workers.

Still, there seem to be things that can be improved upon to make the car more “perfect” for the everyday driver.

One complaint was that it was not easy to enjoy music behind the wheel due to high wind noise at speeds of over 120 kph. And additional space in the trunk may be needed for young, active customers who love to pack up and leave on the weekends.