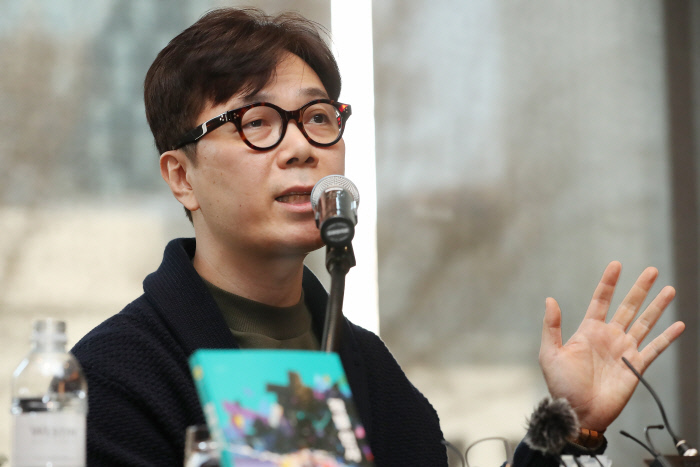 Novelist Kim Young-ha speaks during a press conference in Seoul on Feb. 20, 2020. (Yonhap)

“Farewell,” published last Saturday, is the latest in the “Millie’s Original” series available exclusively on the e-book platform, accessible for a 9,900 won (US$8.30) monthly subscription fee.

The book comes with an audio version recorded by actor Park Jung-min, also available on Millie’s Library, and a paper book edition available at a higher subscription fee.

The book, Kim’s first novel since “A Murderer’s Guide to Memorization” in 2013, will be exclusively available on Millie’s until it is fully published in print by a separate publishing house in May, according to the e-book service.

“Farewell” is Kim’s second novel set in North Korea, following his story of a North Korean spy in his 2006 book, “Your Republic Is Calling You”

Set in the North Korean capital of Pyongyang, “Farewell” is a quest for unique human qualities told through a story of humans and robots who interact and unite in their efforts to find their identities.

“After all, I think what makes humans human rests on how one treats, accepts and unites with other beings who are different to oneself,” Kim said.

When he was little, living in Paju, just south of the inter-Korean border, the writer heard North Korean propaganda broadcasts that aired in the border area almost daily.

“Having grown up listening to that, I had a lot of interest in North Korea,” Kim said, adding that if the two Koreas unify, Pyongyang, having long been left out of the sweeping modernization process, will be a model laboratory for social experiments.

The first e-book project was a major challenge for the writer personally, who unquestionably prefers paper books over electronic or audio versions.

“The e-book platform was an unfamiliar format for me … so I decided to write a novel in a way that I have not done so far,” he said.

“I think I was able to be bolder in forming the novel’s subjects and content as the subscription-based service means the novel would be open to only a limited range of readers in the initial stage,” he said.

Regardless of its format, a solid story will still be loved by readers, Kim said.

The novel is Kim’s first book release since his essay collection, “Reasons for Travel,” topped the 2019 book sales chart, making a splash in the publishing industry and among readers.