SEOUL, Aug. 24 (Korea Bizwire) — Lee Sun-hee, a working mom of two preschool-age children in Seoul, shudders whenever new stories pop up about a child being left behind on a school bus for hours, and now she has decided to make her concerns heard.

She recently joined an online petition to require all school buses to use a “sleeping child check system,” which is designed to force the bus driver to walk to the back of the bus to physically switch off a mechanism before leaving the vehicle.

The petition posted on the website of the presidential office gathered over 103,000 signatures in a month following the death of a four-year-old girl left on a hot daycare center bus in Dongducheon, north of Seoul, on July 17.

“Just having a real button that must be turned off is not a fundamental safety measure, but it would at least give me peace of mind,” the 36-year-old office worker said. “I felt like I needed to do something to make school buses more safe than now, leaving no room for human error.”

Lee is one of many parents growing more concerned about how to get their kids to daycare centers and kindergartens safely, prompting educational offices and provincial authorities to consider solutions that make it easy for drivers to keep their young passengers safe and their vehicles clear after completing their routes.

Following the latest fatal incident, the Ministry of Health and Welfare said it will require the “sleeping child check system” on all school buses by the end of the year. This includes an alarm system, a beacon using near-field communication technology and sensors based on the geographical positioning system (GPS).

While drivers are trained to follow strict protocols when inspecting every seat at the beginning and the end of their routes, the idea is to have a fail-safe system in place even when teachers and drivers forget to abide by safety regulations.

The simple way is having a switch at the back of the vehicle that the driver has to either turn off with a special key or by pressing a button in order to complete his trip. Advanced systems can give parents real-time information on the whereabouts of their children and trigger an alarm when something seems amiss.

These safety systems have already been adopted in other nations, including the United States, but many preschool institutions haven’t embraced them because of the extra cost.

The sleeping child check alarm costs about 250,000 won (US$222) to 300,000 won per vehicle, and the beacon system needs installation and operational costs that go beyond the presence of a switch and requires kids to carry special devices.

While the measures proposed by the government and lawmakers need time and extra money to be adopted at the national level, more kindergartens and daycare centers are using free applications capable of keeping tabs on young riders that may go some way to alleviating parents’ worries. 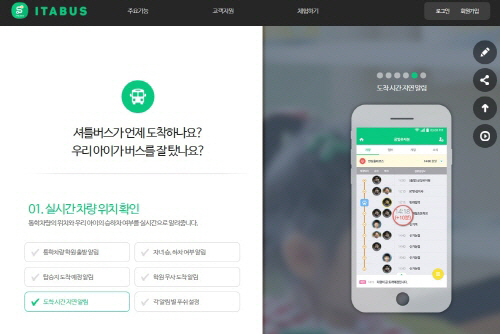 “Itabus,” a real-time school bus-tracking app based on GPS and a messenger platform, is one of the advanced services that track children’s locations every time they take a ride and sends messages before the bus arrives and kids board it. The GPS system also allows a dispatcher to flag a bus if it went over a certain speed limit and monitor any unplanned stops.

“Parents find it convenient because they get messages when their kids get on and off the bus, and they receive detailed messages,” Lee Kyung-ah, the principal of Myong Run Edu Care Center, a public child care center in Seoul, said. “We used to get complaints from parents when their children miss a bus or wait for too long, but we haven’t received any complaints about the school bus this year.”

About 130 kindergartens and daycare centers have used the system with 7,000 parents, and a growing number of provincial governments and educational offices are encouraging parents to use the application, according to Gnbcore, the application’s developer.

Lee Kyung-hwan, CEO of Gnbcore, says the government should broaden the scope of its attention beyond children being left on a bus and take steps to make such vehicles more safe for passengers.

“Drivers are often under time pressure because of traffic jams, unexpected delays and absences, while teachers escorting children have to pull double duty, answering calls from parents,” Lee said. “The government should come up with more fundamental solutions to prevent school transportation-related accidents, often caused by lax following of guidelines.”