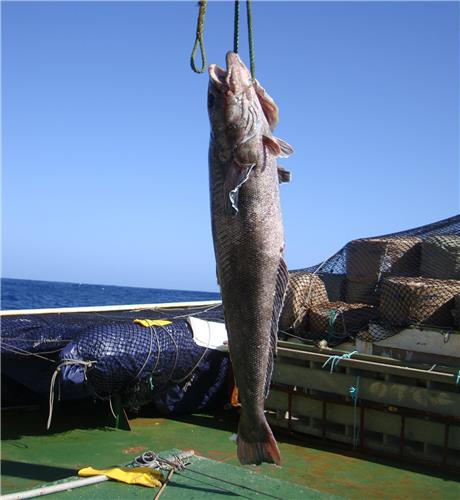 The beacon attached to the fish contains information on water temperature, light exposure, and water depth, which it collects in 15-second intervals, allowing a detailed analysis of yearly migration and the species’ second nature. (image: NFRDI)

BUSAN, Aug. 12 (Korea Bizwire) – The Antarctic toothfish (dissostichus mawsoni) is a cod icefish species native to the Earth’s southern seas. Living 1,000 to 1,800 meters below the ocean’s surface, the fish take about 17 years to fully mature, and are known to live up to almost 50 years. Yet, little is known about their specific migration routes.

To discover the lifecycle of these unfamiliar creatures in depth, Korean fisheries observer Park Nam-hee captured one of the fish in Antarctica in February last year, and tagged it with an electronic tracking beacon. The fish was recently recovered by Park, who is now analyzing the data the tracking chip accrued over the past year.

According to the National Fisheries Research & Development Institute (NFRDI), the project to study the Antarctic toothfish’s ecology was launched in 2014, and this was the first time that a beacon had been successfully recovered.

The beacon contains information on water temperature, light exposure, and water depth, which it collects in 15-second intervals, allowing a detailed analysis of yearly migration and the species’ second nature.

“We expect to get a better picture of the ecological characteristics of the toothfish once we finish analyzing the year’s worth of data,” said researcher Lee Jae-bong from the NFRDI. “Our research so far tells us that toothfish travel to shallower waters during the summertime, contrary to our previous assumption that they would swim into deeper seas.”

Lee also added that a decrease of the surface temperature in the area due to melting Antarctic may be related to migration patterns.

“Korea has been criticized for its lack of scientific contribution despite the high number of Antarctic toothfish we have captured so far, but our latest study will help ease that perception,” he added.

The NFRDI plans to announce its findings at the Convention for the Conservation of Antarctic Marine Living Resources in October.

“If we can intensify our research efforts, and further contribute to the international science community, I expect it will also help Korea obtain a more stable fishing quota.”