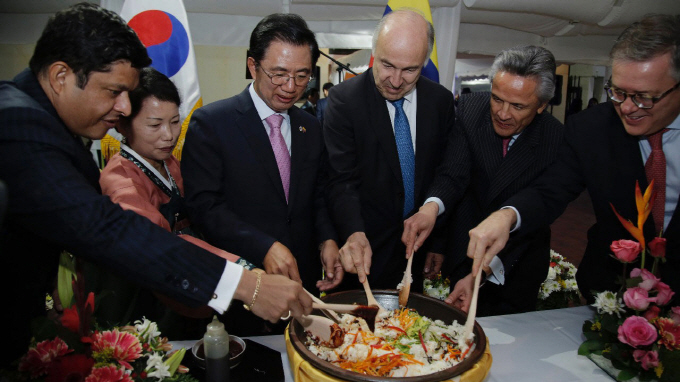 SEOUL, Jul. 16 (Korea Bizwire) — The Korean Embassy in Colombia has released details of the “Korean Food Festival Night” event held last Thursday at the ambassador’s residence, to which over 200 dignitaries and distinguished guests were invited as part of effort to promote friendly ties between the two nations.

The dishes were lauded by the participants for their delicious taste and stunning presentation. Enrique Gil Botero (Minister of Justice and Law), Andres Chaves (Minister of Transport), Jose Javier Perez (Deputy Minister of Defense) were some of the distinguished Colombian guests present at the cultural event who took a hand in making their own bibimbap dishes.

In addition to the food, a traditional Korean wedding was reenacted for the Colombian audience.

The demonstration of the pyebaek ceremony, a type of formal greeting ritual from newlywed couples, by a Colombian couple dressed in Korean traditional hanbok attire was received favorably by the local guests.

Officials from the Korean embassy also prepared ginseng products such as extract and dried ginseng in addition to traditional Korean tea, liquor and snacks for the crowd to taste.

Kim Doo-sik, the Korean ambassador to Colombia, said that Korean food represents the history and culture of the nation and is very healthy due to the fermentation process that goes into creating many of the dishes.