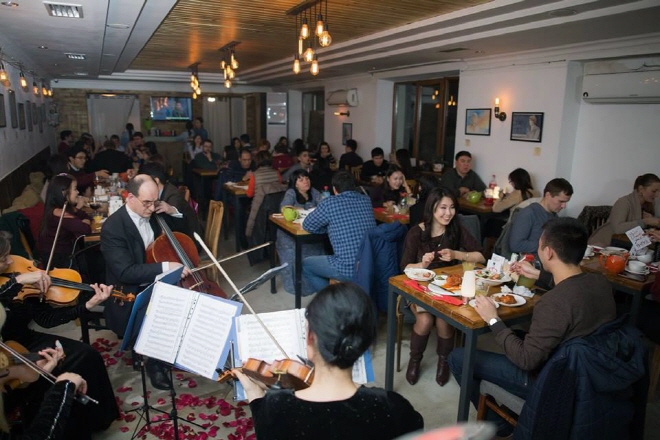 Every Saturday, the restaurant is set up as a concert hall. (image: Chung Chi-hoon)

SEOUL, Aug. 12 (Korea Bizwire) — Boulevard Erkindik, located in the heart of downtown Bishkek, the capital of Kyrgyzstan, is home to one of the most popular restaurants in town – Chicken Star, which was launched in May 2015 by Chung Chi-hoon, a 37-year-old Korean.

TripAdvisor, the world’s largest travel information website, ranked Chicken Star as the most popular restaurant among some 800 Bishkek eateries in 2017.

Chung’s restaurant serves Korean-style chicken, but the restaurateur has developed his own sauce to suit local tastes and serves 11 different kinds of chicken.

This means that Chung has introduced a “new” taste for locals who typically cook chicken by boiling or roasting.

Chicken Star is also unique in that it operates in the form of a social enterprise. Most of the profits are said to be spent on education for young people in the country, support for artists and employee welfare.

Chung, who even held painting exhibitions in Boston and New York, converted part of the store’s space into exhibition halls, knowing that Bishkek had few places for artists to display their work.

There have been more than 40 exhibitions so far. Every Saturday, the restaurant is set up as a concert hall. Students can buy beer at half price, and those who perform are provided with beer free of charge.

Chung, a member of the Kyrgyzstan branch of the World Federation of Overseas Korean Traders Associations, pays attention to the potential of entering the local market.

“Kyrgyzstan alone, it’s not a big market, but it’s a place where there’s a chance to expand into neighboring Russian-speaking countries,” Chung said.

Chung thus opened his second store in Almaty, Kazakhstan, in May. The second store, located on a street filled with luxurious restaurants, operates the same way as the first one.

His goal is to open two to three new restaurants in Almaty to gain experience and then move into a bigger market.