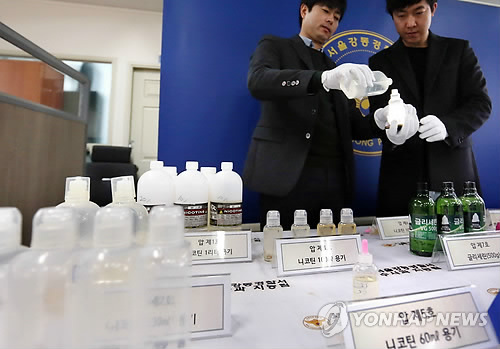 The Gangdong Police Agency in Seoul said on February 11 that the couple is accused of having made 668 online transactions of e-cigar liquid nicotine made with undiluted liquid nicotine over the last six months.

According to the police, undiluted liquid nicotine is a highly toxic substance, and is banned from commercial purchase without a business license. However, the arrested teens compounded e-cigar liquid without taking any safety measures, solely based on information found online.

The teens led customers into thinking that they were purchasing products from a licensed seller by displaying a business license card for alcohol on the illegal transaction webpage. The couple also sold undiluted liquid nicotine to some customers while providing detailed how-to instructions for compounding e-cigar liquid.