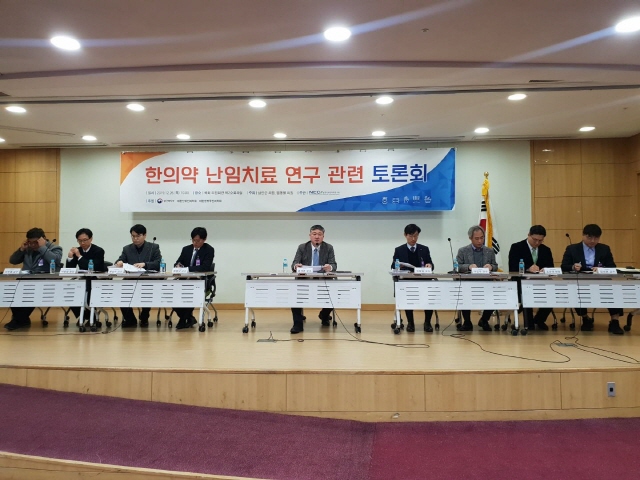 Participant speak during a debate on the treatment of infertility with oriental medicine in Seoul on Dec. 26, 2019. (Yonhap)

Those in the medical community are at odds over a recent research paper released by Kim Dong-il, a professor of oriental medicine at Dongguk University, at a forum Thursday on research into the treatment of infertility with herbal medicine at the National Assembly Hall.

Kim attended the forum as a presenter and introduced the results of his research.

The main point of his research was that 90 women aged between 20 and 44 were able to have a similar effect to artificial insemination, with the rate of pregnancy reaching 14 percent, after oriental medicine treatment.

In response, the medical community pointed out that the research method lacks grounds for recruiting cases without a control group.

Choi Young-sik, a medical professor at Yonsei University, said, “Many of these studies will help us come up with clear evidence, but we cannot say that the research that recruited patients can be verified from a medical perspective,” adding, “Without a proper control group, it cannot be regarded as the result of an evidence-based study.”

He also criticized the safety of the pregnancy given the miscarriage.

“During pregnancy, we do not take drugs recklessly due to concerns such as causing deformities,” Choi said. “In professor Kim’s research, the miscarriage rate increased, which can be seen as a major abnormal reaction.”

“There are specific medicines prescribed depending on the stage of pregnancy, such as before the ovulation period, onkyung-tang. Furthermore, the medicines were prescribed based on the ovulation cycle, and there are no medicinal substances such as moutan, which is controversial for use during pregnancy,” Kim said.

“I do not think there are any problems in safety when considering the combination capacity of individual drugs.”

“We believe that we can conduct replication studies on safety in the future,” Kim said. “If we work with the medical community, we will also consider the possibility of higher safety standards being applied.”