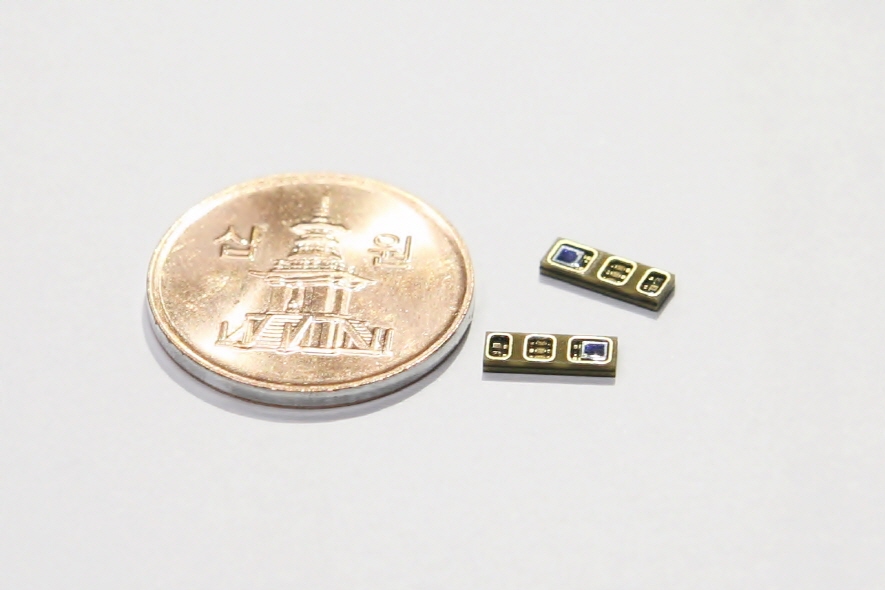 The key to wearable technology is reducing the size of the device and minimizing power con-sumption. No matter how excellent device’s feature is, if a wearable device is bulky and the battery wears out rapidly, it is difficult to popularize.

With a thickness of just 1 mm(0.04inches), this module includes a Photo Diode(PD), 5 LEDs, and Integrated Circuit(IC). Thinner sensors allow wearable devices and smartphones to be-come thinner, and a more free design is implemented.

To minimize the thickness of the module, LG Innotek utilized their advanced embedded PCB technology. The technology embeds integrated circuits into the PCBs. The Former modules were manufactured by mounting the IC on the PCB and then seating the photo diode on top of it. This approach has its limits when it comes to reducing the thickness.

The module consumes less power with ultra-slim thickness. The inside is gold-plated to max-imize luminance efficiency by minimizing the amount of LED light that is absorbed. With this module, the strength of the biometric signals increases by about 30%, so you can use low power to accurately detect biometric signals. Battery consumption has been reduced by 20% compared to the existing module.

The accuracy of the measured information has also been improved. This new sensor mod-ule’s range of error for measured data is ±5 bpm during exercise and even in stable condition, it can measure data within an error range of ±2 bpm which is comparable to that of medical devices.

When the user measures their heart rates using a wearable device, the existing module’s range of error while exercising is ±8 bpm (beats per minute). If the user’s heart rate is actually 120 bpm, the heart rate readings measured by the wearable device will be between 112 and 128 bpm. This module increased its accuracy up to 115~125 bpm.

The LG Innotek sensor module was developed by converging differentiated technologies such embedded PCBs and LEDs.

“The core part of IoT (Internet of Things) is the sensor that enables information sharing. We will develop high-tech sensors and use them in automobiles, consumer electronics, wearable devices, and other things to lead the IoT industry,” said Changhwan Kim, Executive Director of the Components and Materials R&D Center. (End)

About LG Innotek CO,.Ltd.
LG Innotek is a leading global components and materials manufacturer and an affiliate of LG Group.  LG Innotek was established in 1970 and recorded $6.1 billion in sales in 2014.  The company specializes in components for the mobile device, automotive, display, semiconduc-tor, IoT and LED lighting sectors, including camera modules, automotive electronic compo-nents, LED, tele-communication modules and substrate materials. And it is the world’s largest manufacturer of camera modules.