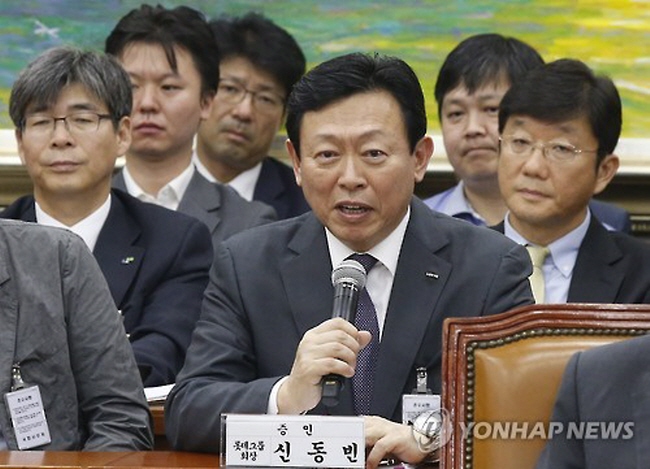 Shin Don-bin, the chief of Lotte Group, appeared the parliament as a witness to face questions over the retail giant’s corporate governance issues. (image: Yonhap)

SEOUL, Sept. 17 (Korea Bizwire) — The chief of South Korean retail giant Lotte Group pledged Thursday to untangle a cobweb of cross-shareholding among its affiliates and speed up the listing process of its hotel unit.

Testifying before a parliamentary committee, Shin Dong-bin also ruled out the possibility that Lotte, the fifth-largest family-run conglomerate in South Korea, may be embroiled in another family fight over leadership.

Shin appeared before a parliamentary audit of the antitrust watchdog the Fair Trade Commission, tasked with assuaging public discontent after a bitter fraternal feud over winning control of the nation’s fifth-largest conglomerate.

After winning the backing of Japanese shareholders last month, the 60-year-old has vowed to improve corporate transparency and list Hotel Lotte, a hotel and duty-free operator.

During the nationally-televised audit session, Shin apologized for the family feud and vowed to clean up 80 percent of the cross-shareholding structure by the end of October.’

“We formed a task force to improve the governance structure and restore the brand image,” Shin said.

Lotte has listed only eight companies and the core units are linked through unlisted Japanese units. Shareholders of the small Japanese firms remain largely shrouded in darkness because they are not subject to Korea’s financial disclosure rule.

As part of reform efforts, Shin bought 35.8 billion won (US$30.6 million) in Lotte Confectionery Co. shares from Lotte Construction on Aug. 28, clearing up about 34 percent of the cross-shareholding links.

Shin said the task force is working on the initial public offering for Hotel Lotte after selecting three lead managers, with plans to complete it by the first half of next year.

While more than 99 percent of the hotel unit is owned by Japanese firms, 30 to 40 percent of shares will be up for sale for the offering, he said. Lotte Holdings, the group’s Tokyo-based holding firm, holds a 19.07 percent stake in Hotel Lotte, while group investment units called L Investment Company hold a combined 72.65 percent stake.

“Following the offering, we will reduce the Japanese stock ownership below 50 percent later through various measures, including a capital increase,” Shin said.

Lotte said earlier the hotel unit is expected to have a market capitalization of around 10 trillion won when it lists, but market watchers estimate it could reach as much as 20 trillion won, considering its large stakes in affiliates and strong earnings.

When repeatedly asked about the company’s identity, Shin said Lotte is a Korean company that generates most of its sales locally.

“Lotte is a Korean company because it pays tax according to the Korean law and its employees are Koreans,” Shin said, noting he will maintain the Korean nationality.

Founder Kyuk-ho was born in the South Korean port city of Ulsan, 414 kilometers south of Seoul, while his sons were born and raised in Japan by a Japanese mother.

Lotte has tried to allay public discontent over its historic links to Japan as it could deal a harsh blow to the group that heavily relies on the retail, food and travel industries.

Lotte was first established as a confectionery store in postwar Japan in 1948. It later expanded into Korea when diplomatic ties between Japan and Korea were normalized following Japan’s colonial rule from 1910 to 1945.

Although lawmakers’ summoning businessmen has been a longstanding ritual as a way to flex their muscles in front of cameras, it is the first time the head of one of the nation’s top 10 family-run conglomerates, called chaebol, showed up before parliament to face acrimonious questions.

Shin was called in for a 2013 parliamentary audit, but he evaded it, citing overseas trips and instead paid fines. But this time, negative public sentiment and growing government pressure left him no choice but to clarify issues related to the governance structure and other related issues.