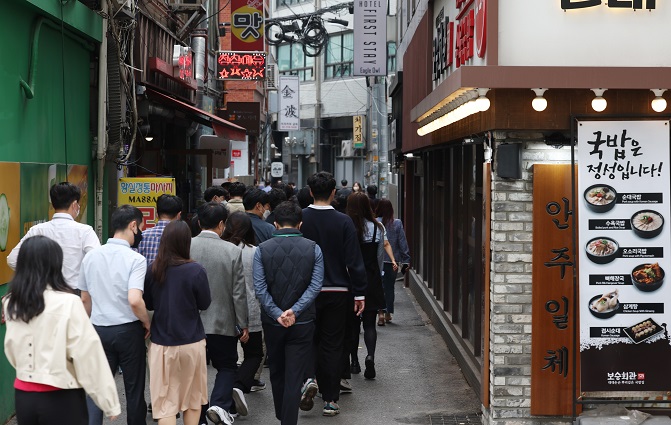 Office workers head to a restaurant near Seoul City Hall for lunch on April 14, 2022. (Yonhap)

SEOUL, May 27 (Korea Bizwire) — Inflation is resulting in higher lunch prices, prompting some to coin a new word “lunchflation” to describe the phenomenon.

The Korea Consumer Agency reported that the price of “naemgnyeon,” cold buckwheat noodles served in various types of broth or mixed with spice, reached an average of 10,192 won as of April, rising by 9.5 percent in the last 12 months to jump over the 10,000-won (US$7.93) hurdle.

The price of “jajangmyeon,” a Chinese-Korean fusion dish of noodles in black bean sauce, rose by 14.1 percent, exceeding the 6,000-won hurdle while the price of hand-rolled noodles “kalguksu” passed the 8,000-won hurdle after rising by 10.8 percent.

Statistics Korea said the country’s overall price index for dining out last April jumped by 6.6 percent from a year ago. It was the highest jump since April 1998. Prices of all of the 39 foods in the analysis rose except for hamburgers.

Job portal Incruit conducted a survey of 1,004 office workers, 56 percent of whom felt eating out for lunch had become too expensive, while 39.5 percent felt lunch prices were ‘more or less expensive’.

“Both demand and supply factors are bringing up the price of dining out,” said Lee In-ho, a professor of economics at Seoul National University. “An increase in restaurant prices is something that can easily be felt, directly impacting the lives of the public.”