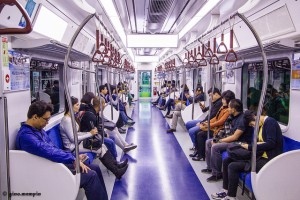 SEOUL, South Korea, Dec 13 (Korea Bizwire) – Mecca of Saudi Arabia is a famous destination for Muslims around the globe who will gather together for five days to pray and celebrate on the annual Haii day — which comes on the eighth day of the month of Dhul Al-Hijjah in the Muslim calendar. Around up to 6 million people flock to Mecca, leaving the sacred place in severe traffic congestion. So, Osama Fadhl Albar, Mayor of Mecca, paid a visit to Seoul, well-known for its excellent transportation system including the Transport Intelligence System, Public transport reform policy, Bus rapid transit, etc., for a solution of their own.

The Mayor Albar toured around the city’s major transportation centers such as Transportation Operation & Information Service(TOPIS) and Seoul Station’s Public Transportation Transfer Center. He was especially amazed when he had a chance to experience Seoul’s T-money system himself, by which he could go anywhere he wanted using any type of transportation media including Taxis with a single T-money card. He showed much interest in the fact that a user was not supposed to pay double when transferring.

During this tour, he was known to have carefully studied BIS(Bus Information System) installed in bus stops to let the citizens know what time their buses are arriving. He also examined the Airport Railroad and Metro Line 9. After seeing the remote monitoring system at Line 9 with his own eyes from General Control Center, he paid attention to the official who explained to him about the control system which can control a train in cases of emergency. He also watched the Express line and All-stop line working together in the upgraded Line 9 system which opened in 2009.

City of Seoul proposed that it would support the technology transfer of its Intelligent Transportation System (ITS). City of Mecca is known to be planning on operating its Metro system jointly with its bus system. Hence, Seoul’s transfer system know-how can play a vital role in Mecca if it is applied there. City of Seoul already invited Metro-related officials and workers from Indonesia, Libya, Thailand, and Azerbaijan twice this year and held an “Educational Seminar on Metro Construction and Operation”.

Meanwhile, Mecca city is planning to lay total four lines of Metro (extension of 182km) with 88 stations along with a bus system (123km in total length) of 147 stops, all of which will be interconnected and integrated in their operations. Mayor Albar’s East Asian trip includes the cities of Tokyo, Seoul and Hong Kong, with Seoul being the second city, after Tokyo, he visited.