Soldiers said they felt less isolated after being allowed to use mobile phones. (image: Yonhap)

SEOUL, Feb. 1 (Korea Bizwire) — An Army battalion in Gapyeong-gun, Gyeonggi Province held a meeting on Thursday to discuss the recent policy of allowing soldiers to use mobile phones at military bases.

Soldiers at the battalion have been using cellphones since last August.

At the meeting, officers and soldiers exchanged their views on the change that the new policy has brought to military bases. Family members and friends of the service members were also invited to the session.

The majority of the participants had positive feedback for the new policy, saying mobile phones had not compromised the security and military discipline inside the base.

Soldiers said they felt less isolated after being allowed to use mobile phones.

“There were too few incoming-only phones or public phone booths for all of us to use, and making a private phone call was almost impossible,” said one soldier.

“Now that each of us has our own mobile phone, we feel connected to the outside world, talking to our families and friends whenever we want to.”

“I was able to call my son on a mobile phone after receiving the news that he was injured in December,” said the father of one of the soldiers at the base.

“Thanks to the new policy, I feel much better and safer sending my son away to serve in the military.”

Many soldiers said mobile phones have also helped them study. “Now, I don’t have to go all the way to the computer lab to use a scientific calculator,” said one soldier who studied engineering at college.

Officers were also satisfied with the use of mobile phones.

“Soldiers seem happy to feel connected to the outside world, and it is more convenient for me as their supervisor to contact them more easily,” said Park Hyun-woo, a company commander.

The majority of the officers and soldiers said the use of mobile phones did not compromise the security environment of the base.

Soldiers, by default, are not allowed to access secret documents or secure facilities, and the use of mobile phones is allowed only after working hours.

“While we are aware of the security concerns, mobile phones have not infringed upon any military regulations,” said Park.

“When it comes to taking photos with mobile phones and other illicit acts, officers have more than enough capabilities to handle them.”

One major complaint surrounding the use of mobile phones was the rate plans. Soldiers were on monthly plans that charge them more or less 50,000 won (US$44.92) each month, similar to the ones used by civilians.

They complained that they were being charged too much for using cell phones only during a certain period of time.

“Our monthly pay has increased recently, so I wouldn’t say that the mobile fees are costly. But to think that we have to pay so much to use so little, it does seem like a waste of money,” said one soldier.

“I hope the military and mobile carriers can come up with new cell phone plans for military personnel like us.” 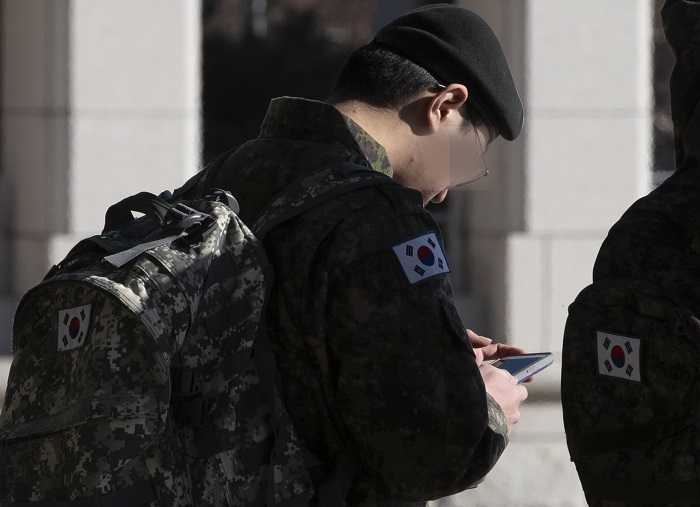 Soldiers were on monthly plans that charge them more or less 50,000 won (US$44.92) each month, similar to the ones used by civilians. (image: Yonhap)

Members of the National Defense Reform Advisory Committee were also present at the meeting to gather feedback and discover policy loopholes.

“We need your help to resolve a variety of issues arising from the new policy,” said Kim Ki-don, a member of the advisory committee.

The South Korean military has piloted the use of mobile phones at designated bases. The nationwide implementation of the new policy will be decided by the second quarter of this year.

Mobile phones can be used anywhere outside of secure facilities. Soldiers are prohibited from taking photos or recording sounds using mobile phones.

The Ministry of National Defense plans to introduce a security system that shuts down photo-taking functions on all military mobile phones by March.

Until the system is introduced, soldiers will be required to cover the lens of the camera with a sticker.