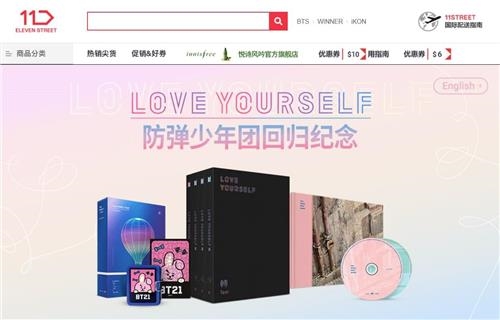 11Street revealed today that the largest percentage of its online overseas buyers came from Taiwan, accounting for 30.7 percent of its overseas revenue in merchandise excluding record sales.

Customers that made up the overall overseas Chinese population of Taiwan, China, Hong Kong and Macau accounted for almost half of the total purchasing population at 43.2 percent.

Outside of Asia, online consumers from a total of 60 countries purchased K-pop merchandise from 11Street’s website, including those from Latin America, Europe, the Middle East and Africa.

The website stated that after the release of its English and Chinese websites last year, the total volume of transactions over the last three months had increased 150 percent compared to the first three months following the launch of the vendors’ multi-lingual websites.

One official at the online shopping mall said that more overseas fans are buying local merchandise. “The website will be utilized as a global distribution channel,” said the official.