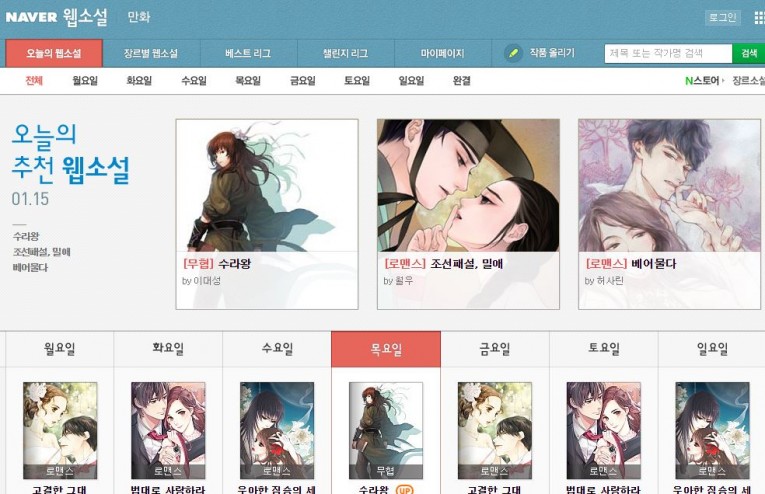 The web novel is the novel version of Naver Webtoon, so it is run in the same way. (image: Naver)

SEOUL, Jan. 16 (Korea Bizwire) – After the official launch of Naver’s Web Novel only two years ago, there are signs that the platform is succeeding in supporting writers, and helping them to earn a considerable amount of income.

According to Naver, the web novel platform now features 109 official writers and around 110,000 amateur writers. The total number of novels uploaded exceeds 230,000, just two years after the service was launched on January 15, 2013.

In 2014, the officially listed novels on the platform enjoyed more than 3.6 billion views, a 163 percent increase over 2013. Each piece was viewed 29 million times on average. As the platform is optimized for the mobile environment, more than 83 percent of the users visit through mobile devices.

With the Challenge League feature where any one can offer their own novel to the public, the platform was able to expand the number of novels on file to more than 230,000.

“The challenge system where amateur writers can challenge to be official writers is working very well, as more than 39 percent of the official writers are from the Challenger League or the Best League. If we include challenge league writers who began their literature career in other places or publication contracts, the number will be increased,” said an official at Naver.

Furthermore, profits are also being made from derivative products such as paper books and e-books. Among the official novels in the platform, 37 were published as paperbacks. In the best league, some 120 writers made contracts to publish paper books or e-books.

A Naver official added, “By introducing quality novels continuously, we will keep expanding the genre novel market and increasing earnings for the writers.”