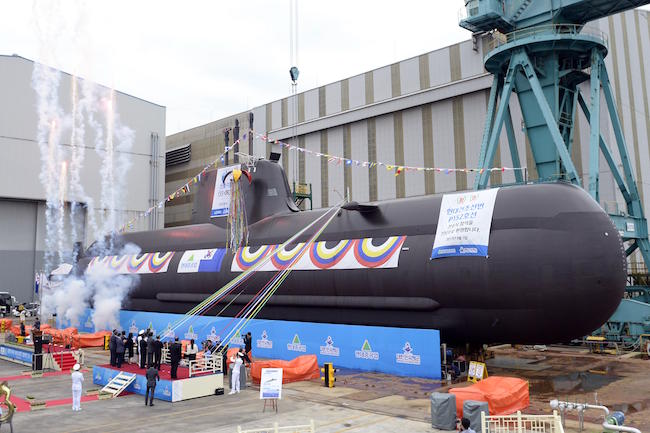 The Sin Dol Seok sub is named after a famous Korean admiral who led the country’s fight against Japanese aggression in the late 1890s and early 1900s. (Image: Yonhap)

SEOUL, Sept. 7 (Korea Bizwire) — South Korea on Thursday launched a new 1,800-ton submarine, characterizing it as a “strategic dagger” to strike precisely at a range of targets.

The launch of the diesel-electric submarine wrapped up the Navy’s KSS-II acquisition program, which began in 2000, for the introduction of nine 1,800-ton 214-class submarines.

“It’s a national strategic dagger capable of precisely striking not only the enemy’s ships and submarines but also ground targets deep inland,” Adm. Um Hyun-seong, the Navy chief of staff, said during the launch ceremony at the Hyundai Heavy Industries shipyard in Ulsan.

The Sin Dol Seok sub is named after a famous Korean admiral who led the country’s fight against Japanese aggression in the late 1890s and early 1900s.

Equipped with South Korea’s indigenous 1,000-kilometer-range cruise missile, it is 65 meters long and 6.3 meters wide, and it can sail at a maximum speed of 20 knots.

The Navy plans to put it into operation in 2019 after a series of tests.

It will increase the number of the Navy’s submarines to 18. The Navy will begin to introduce 3,000-ton submarines in 2020.