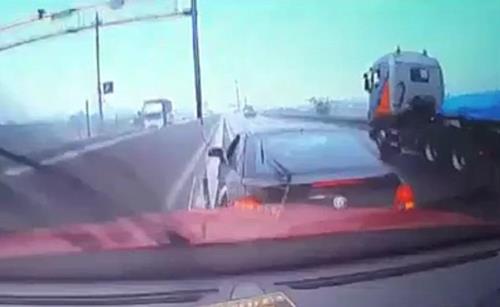 SEOUL, May 16 (Korea Bizwire) — A man who stopped an unconscious driver’s moving car on a major highway with his own has received media attention and praise from many people for preventing a bigger tragedy that could have taken many lives on the road last week.

Hyundai Motor Group first offered to repair the man’s damaged car free of charge, but he refused. The company was deeply touched by his modesty and decided to give him a brand new Veloster Coupe for his good deed.

The story began on the morning of May 12 as Han Yeong-tak, 46, was driving his Hyundai Tuscani down the second West Coast Highway.

When he spotted an unconscious driver in a car that had hit the median strip but continued moving forward, grinding against the barrier, his car was the least of his concern, he said.

Incheon District Police decided to close the accident case without any charges on May 14 taking into account Han’s intention to save lives.

For minor car accidents reported to local police departments, insurance companies need to come to a conclusion on the value of damages to cover for the insured cars.

Han reported the case to his insurance company, claiming damage to an indicator light and bumper, and he is now waiting for the company to process his claim.

Even though his insurance premiums could go up next year as is usually the case following a car crash, he said he was not concerned about the increase and was just glad to receive a thank-you call from the driver that he was able to save.

Traffic violation attorney Han Moon-cheol said, “Because the driver caused the crash with the intention to rescue another driver in danger, the rescued driver’s insurance company should pay for all the damages according to civil law.”

According to Civil Act Article 735 (Management of Affairs in Urgency), if an individual has managed affairs in order to protect another individual against an imminent danger to the latter’s life, he shall not be liable for any damages caused thereby.

The attorney also said noted that the driver did not even need to report the case, and added, “If the insurance company refuses to pay for the damages, he can file a civil lawsuit to recoup the costs.”