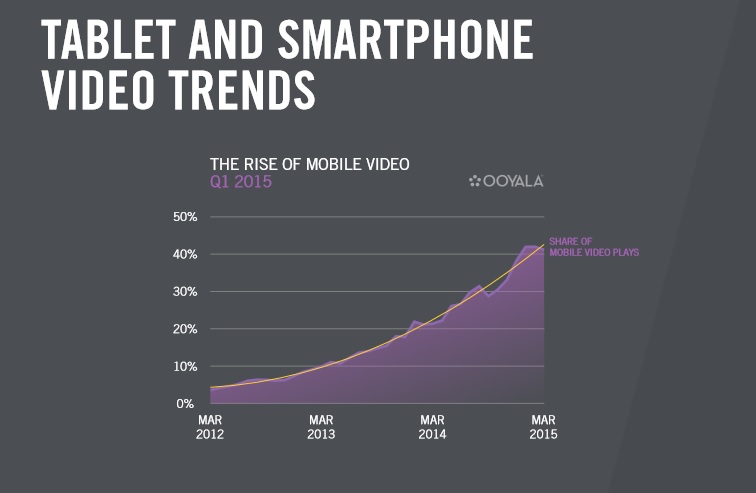 The growth of mobile and tablets this quarter supports the prediction that viewing will make up 50 percent of all online viewing before the end of 2015. (image: Ooyala)

SANTA CLARA, CA,  Jun. 25 (Korea Bizwire) – Ooyala, a Telstra subsidiary and a leading innovator in premium video publishing, analytics and monetization, released its Q1 2015 Global Video Index, revealing mobile devices made up 42 percent of all online viewing during the quarter. In particular, smartphones are driving the majority of mobile viewing growth, receiving four times more plays than tablets during the quarter. The report also shows TV broadcasters, compared to publishers and brands, lead the trend with more than half of all views on mobile devices, and illustrates how more video advertising is also shifting from PCs to mobile devices.

In addition, for the first time the Global Video Index shows the impact of personalized content recommendations on viewer engagement and revenue opportunities, as well as emerging trends in programmatic trading between premium content providers and advertisers.

The Growth of Mobile Viewing and Monetization
The report highlights the profitability potential to build content strategies around mobile as it continues to grow more rapidly than any other viewing option. In Q1 2015, plays on tablets and smartphones together increased more than 24 percent, 100 percent since Q1 2014 and a stunning 367 percent increase over the past two years.

The growth of mobile and tablets this quarter supports the prediction that viewing will make up 50 percent of all online viewing before the end of 2015.

The Case for Content Recommendation
This report shows the opportunity for content providers to personalize their experiences, increasing engagement and ultimately revenue. Tracking Discovery starts ratio, the success rate of how often recommended video is actually played, Ooyala finds that consumers will view recommended content as often as 50 percent of the time. Breaking down into verticals, the report shows:

Increased Confidence In Premium Programmatic
The report identifies trends that signify industry progress towards more programmatic trading. In Q1 2015, Ooyala saw that Deal ID Transactions, the identifier used to facilitate programmatic private marketplace transactions, among broadcasters and premium publishers, grew 79 percent month-over-month between January and March. This is a testament to premium content owners automating their direct sales through programmatic and their increased confidence in this form of trading.

“Our data is indicative of the rapid pace of change in consumer viewing behavior, which creates new challenges and opportunities for content producers, service providers, and advertisers,” said Jay Fulcher, chief executive officer of Ooyala. “We’re seeing a confluence of major trends that are reshaping audiences on a massive scale — in particular, ubiquitous TV-capable mobile devices, and a major influx of premium content streaming to, and in many cases produced for, over-the-top services. A mobile-first mentality with a keen eye on personalization has never been more important.”

About Ooyala’s Global Video Index
This report reflects the anonymized online video metrics of the vast majority of Ooyala’s 500+ customers, whose collective audience of hundreds of millions of viewers spans nearly every country in the world. Ooyala captures 3.5 billion analytics events each day. We ingested and transcoded over 100 million minutes of video in 2014. That content was delivered to over 220 million unique users around the world. And those viewers played over 10 billion streams comprising almost 30 billion hours of video. We managed inventory for 30 billion video ad impressions, and delivered over 11 billion ads in 2014.

Headquartered in Silicon Valley, Ooyala has offices in New York, London, Stockholm, Sydney, Tokyo, Singapore and Guadalajara, and sales operations in dozens of other countries across the globe. For more information, visit www.ooyala.com.