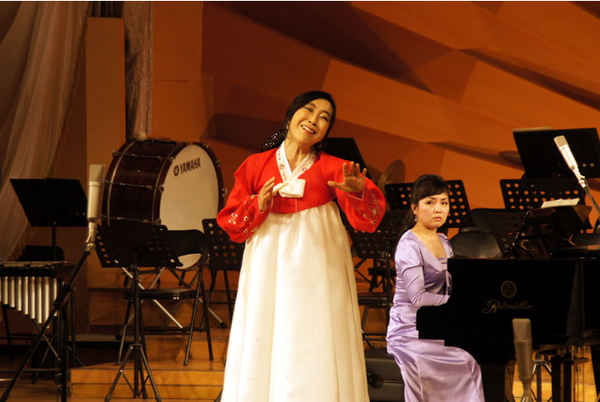 SEOUL, Dec. 15 (Korea Bizwire) — Shin Eun-mi, a Korean-American woman in her early 50s, is at the center of a controversy surrounding her remarks ostensibly in support of the North Korean regime. She appeared in a police questioning on December 14 after being accused of violating the National Security Law by conservative civic groups. Meanwhile, a high school student whose last name was identified as “Oh” who threw a home-made bomb in a forum held by Shin was formally arrested on the previous day.

The Jeonju District Court issued on the 13th an arrest warrant to the 17-year-old boy as it is highly likely that he may run away if he was let loose. The regional prosecutors’ office will try to prosecute him for four charges including causing injuries with explosives, breaking and entering, violation of laws regarding firearms, swords and explosives, and violation of special laws related to property damage. It has been one day since the Iksan policy agency asked for the arrest warrant to the court on the 12th.

What’s amazing is as much as 13 million won has been collected from conservative groups to help out Mr. Oh within only a few days. The Independent (or “DongnipShinmun”), the right-wing Internet media, began the fundraising campaign and several other right-leaning organizations such as “Ilbe,” or Daily Best, have responded enthusiastically.

Oh, a student at a technical high school in Iksan in North Jeolla Province, threw a bomb mixed with sulfuric acidand caused serious injuries to two spectators in a talk show forum held by Shin Eun-mi and her colleague Hwang Sun, a former member of the now-defunct Democratic Labor Party, at a Catholic church in the city on December 10. The incident caused an emergency situation that involved evacuation of 200 or so participants.

He had been a member of Daily Best, the extreme right-wing online community site, since last summer and even posted a message on the day before the terrorist act that he would be the one who will inflict pain on the traitors.

To this, Ms. Shin expressed bafflement, saying, “I deliver almost identical lectures in churches and colleges based on the book I published. I don’t understand why some people stick a label on my talk forums ‘North Korean running dog talk show.’”In an interview held before the police questioning on the 14th, she said to the reporters, “I feel like I was suddenly betrayed by a lover. I don’t want this to happen again in my life.”

What’s bizarre about the whole affairs is that her book “Korean-American Ajumma Goes to North Korea” was selected as one of the recommended books by the Ministry of Culture, Sports and Tourismas late as in 2013.

For reasons that her talk forums were condemned as North Korean propaganda, she pointed her fingers at false reports made by some right-wing media outlets. She said in the interview, “Despite my original intentions, these media outlets distorted facts and made wild allegations, which hurt my reputation.” It remains to be seen whether the prosecutors’ office will be able to press charges against Shin as she is an American citizenship holder.

Some in Korean society are still critical about her talk forums as her remarks seem to be supportive of the North Korea’s Kim regime while turning her eyes away from the abject human rights situation there. Still Shin Eun-mi and Hwang Sun insist on keep holding the forums in other cities in Korea, which will continue to be cause for conflict between conservative and progressive political forces within the nation.