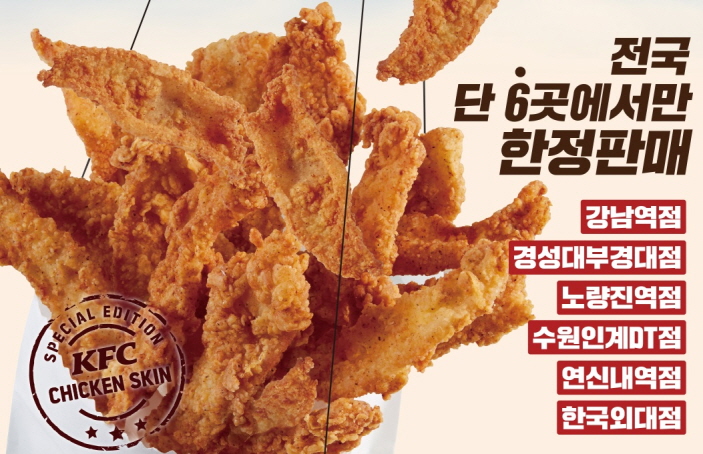 KFC planned to sell limited edition food at six stores from Tuesday. In less than half a day, 6,000 packs of fried chicken skin were sold out at all six branches. (image: KFC)

SEOUL, Jun. 20 (Korea Bizwire) — “Limited edition marketing” is emerging as a new relief pitcher in the food and restaurant industries, which are struggling with thinning consumer wallets.

There was a buzz on SNS that the fried chicken and burger franchise Kentucky Fried Chicken (KFC) would sell fried chicken skin since the morning of its launch.

KFC planned to sell limited edition food at six stores from Tuesday. In less than half a day, 6,000 packs of fried chicken skin were sold out at all six branches.

KFC left open the possibility of expanding sales due to consumer response that surpassed expectations.

Long-lived products, which have met the needs and demands of consumers for decades, are no exception.

Companies are often seeking to “variate” with limited edition products that are available only in certain seasons, while operating marketing strategies that can boost consumer curiosity.

Paldo, the manufacturer of “Bibim Myeon” instant noodles that marks the 35th anniversary of its launch this year, sold out 5 million limited edition products with five times the spicy flavor.

In some cases, a limited number of products have been released as official menu items amid praise from consumers.

McDonald’s released the 1955 Hash Brown burger again this month, which was released only in 2017 as a limited edition.

“From a company’s point of view, it is a great advantage that it can introduce new flavors even if it is already there by combining seasonal characteristics and characteristics of products.”