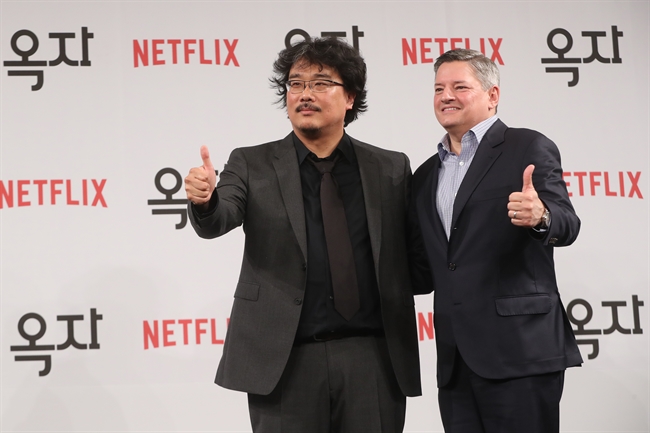 SEOUL, Jun. 28 (Korea Bizwire) — South Korean director Bong Joon-ho said on Tuesday he wanted to tell the story of an animal that can hold many different meanings to mankind in the Netflix-backed sci-fi film “Okja.”

“I wanted to shoot a film about animal which can both be friend or family and food to us,” Bong said during an interview with Yonhap News Agency at a Seoul cafe.

“We sometimes eat grilled pork chops while spending a happy time with our pet dog at home. People separated the notion of animals into these two for their comfort, but I wanted to show them that they actually are one thing through a humorous and rib-tickling experience.”

The film about the friendship between a genetically modified “super pig” named Okja and a farm girl is Bong’s follow-up to his international action film “Snowpiercer.” In the 2013 movie about a post-apocalyptic world, the lower classes are forced to eat gelatinous protein bars made from mysterious insects.

Questioned why he sticks to the theme of food, Bong answered: “Eating is very important and part of our daily lives, but we don’t know well where the food comes from. I was surprised to observe the process of disassembling dead animals at a slaughterhouse in Colorado before the filming. I wanted to tell the problems with factory-based animal husbandry systems by showing exactly how meat is processed.”

“Okja” was co-produced by three Hollywood studios — Plan B, Lewis Pictures and Kate Street Picture Company — while Netflix covered the film’s entire budget of US$50 million. The movie will open simultaneously on the online platform and 107 screens at 83 venues around South Korea on Thursday (Korean time). But the country’s three largest multi-screen chains — CJ CGV, Lotte Cinema and Megabox, which control 90 percent of screens in the country — refused to release the movie, arguing that the simultaneous release would undermine the existing movie distribution system.

Bong said he never intended to ignite controversy by partnering with Netflix.

“Since the movie’s budget size was too big to be handled by a single Asian or European company, I had no other option but to work with an American company. But American companies are notorious for usually not giving the director full control of the film. But Netflix was the only company that gave me full control.”

Bong said he is content with the fact that this would be the widest theatrical release for a Netflix film although it might be the smallest for any of his films.

The director nodded when asked if he was distressed due to the debate over the release but said: “I conducted more than a hundred interviews over the past one month and a half. But there also is a positive side because they talked about the distribution system, media and technical things, not the story. This increases the public awareness of the film with less leakage of its story.”

He recommended Netflix users see the film on a large television set or use a projector rather than smart devices, because it was shot for big theater screens.

“Since it was invited to many film festivals, I guessed it would be continuously shown on the big screen somewhere on Earth,” he said.