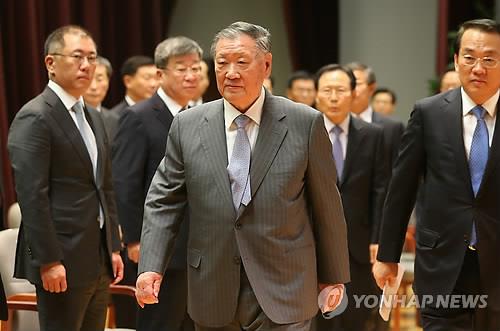 SEOUL, Jan. 16 (Korea Bizwire) — When it comes to buying stocks in South Korea’s family-run conglomerates, reading numbers on balance sheets may not be enough to predict their performance. What the owner family does often matters more.

As several of such business groups, called chaebols locally, are preparing for managerial transfers to the third generation of their founding families, signs of shifts in the families’ ownership structures or power struggles among potential heirs have played a greater role on the Seoul bourse in recent weeks.

The succession scenario for Hyundai Motor Group has become complicated after Chairman Chung Mong-koo and his only son, Chung Eui-sun, the vice chairman, failed to sell 5 million of their shares in Hyundai Glovis Co., a logistics affiliate of the automotive group.’

The stake sale, offered in a block deal, was, in part, interpreted as a means to circumvent stricter antitrust regulations applied to corporate owners and families who own stakes of more than 30 percent in group affiliates. But some saw it as a strategy for a smooth power transfer from father to son.

A successful sale would have raised as much as 1.5 trillion won (US$1.38 billion), much-needed cash for the 44-year-old son to pay inheritance taxes and buy shares in other affiliates, mainly Hyundai Mobis, which matter more in seizing control of the group.

Instead, the failed bid upended the fate of two affiliates. Shares of Hyundai Glovis, overvalued mostly because members of the Chung owner family were major shareholders, plunged to the 15 percent daily limit on the Seoul bourse on Tuesday when the deal fell through, the steepest drop since August 2007. Shares of Hyundai Mobis Co., an auto parts maker that stands at the top of the cyclical cross-ownership structure within Hyundai Motor Group, leaped 12 percent on the same day to their highest price in six years.

Mobis owns a stake in Hyundai Motor Co., which in turn controls Kia Motors Co., which completes the circle by owning a portion of Hyundai Mobis.

Even after the block deal failed, investors weren’t letting go of Hyundai Mobis. Some think that the junior Chung will buy stakes in Mobis and later merge it with Glovis to become the largest shareholder of the group’s holding company.

“Another block deal may be hard because of the dampened investor sentiment. Even if Hyundai Motor tries that option, the junior Chung’s stock value in Glovis has decreased, which means he would have to pay more to acquire shares in Mobis, which is highly unlikely,” said Yoo Ji-woong, an analyst at Taurus Securities Co.

Hyundai isn’t the only chaebol with a troubled succession plan.

Lotte Group, the nation’s fifth-largest conglomerate whose portfolio includes retail, food and hotels in Korea and Japan, has drawn investors’ interest after Shin Dong-joo, the vice chairman of Lotte Holdings Japan and the eldest son of group chairman Shin Kyuk-ho, was stripped of his executive titles at three affiliates in Japan.

The move came as a surprise as market watchers widely believed the 93-year-old chairman’s two sons would each head the group’s operations in Korea and Japan. The eldest son’s ouster immediately raised speculations that his younger brother, Lotte Group Korea Chairman Shin Dong-bin, will be crowned as his father’s successor.’ 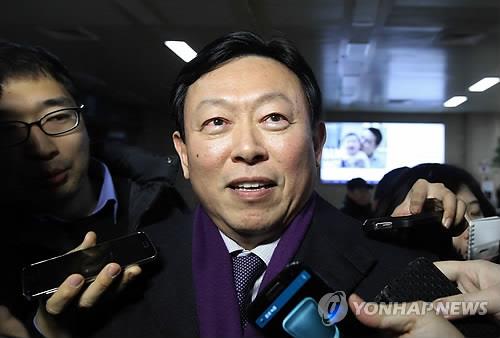 Shin Dong-bin, the younger son of Lotte Group Chairman Shin Kyuk-ho, answers questions upon his arrival in Seoul from his trip to Japan on Jan. 13, 2015, amid speculation that he may succeed his 93-year-old father. (image: Yonhap)

The chairman founded the retail and confectionary giant in Tokyo in 1948, and entered the Korean market in 1967.

In Lotte’s case, the two brothers’ sibling rivalry to raise their stakes in Korean affiliates, including Lotte Confectionary Co., the group’s de facto holding company, was good news for investors.

“In case of Lotte, it is not clear why (Dong-joo) was fired. Attempts to nullify his dismissal or raise his ownership stake in major Korean affiliates could affect Lotte Group’s shares,” said Chung Sun-seop, the CEO of Chaebul.com, a website that tracks the nation’s conglomerates.

Hanjin Group, the operator of South Korea’s No. 1 air carrier, Korean Air Lines Co., also fell into unexpected trouble as it was speeding up the process to adopt a holding company structure, seen as a prelude to handing over the business to Chairman Cho Yang-ho’s three children.

The plan went awry when the chairman’s eldest daughter, Cho Hyun-ah, was forced to step down as a vice president of Korean Air over a row involving a pack of nuts. She was indicted for jeopardizing flight safety after she forced a crew member to deplane because she was angered that a flight attendant had served her macadamia nuts in an unopened bag instead of on a plate, an incident that came to be lampooned as “nut rage.”

Before the Dec. 5 incident, the most likely scenario was that the senior Cho’s son would take the helm of Korean Air, while the eldest and youngest daughters would each take over the hotel and leisure affiliate and a low-budget carrier subsidiary.

But after the incident, angry consumers launched a boycott of Korean Air.

All of this unfolded when the carrier was supposed to be enjoying a heyday from falling crude oil prices.

Instead, shares of Asiana Airlines, the smaller local rival, rose more than 10 times than that of Korean Air over the past month.

The fact that Hanjin Group has to reduce its snowballing liabilities to become a holding company, and that it is trying to do so by issuing new shares worth 500 billion won, also didn’t help.

Although a successful share issuance may enhance Korean Air’s finances, investors suspect that the conglomerate will use some of the raised money to bail out its debt-laden shipping subsidiary.

Market watchers say chaebols are facing growing management risks related to their succession moves at a time when the public is uneasy about members of the third generation of the owner families, who have yet to prove their managerial acumen, taking over the country’s business empires that serve as key economic drivers.

“Chaebols are exposed to higher risks of power conflicts between family members during leadership transitions to the third or fourth generation,” said Song Min-kyung, a researcher at the Corporate Governance Service, a Seoul-based think tank. “Unchecked succession plans can hurt the efficiency of a company’s management, so tougher screenings by shareholders are needed.”