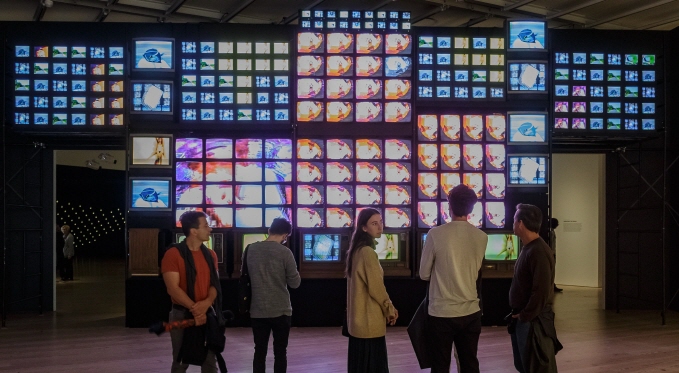 Fin De Siecle II was first revealed at Whitney in 1989, after which it was transferred to private ownership before being donated back to the museum in 1993. (image: Korea Foundation)

SEOUL, Dec. 14 (Korea Bizwire) — For the first time in 29 years, the Whitney Museum of American Art is holding an exhibition of Fin De Siecle II, the most representative piece by Paik Nam-june, the late South Korean pioneer of video arts.

The piece is being showcased at an exhibition titled Programmed: Rules, Codes, and Choreographies in Art, 1965-2018 with support from the Korea Foundation.

Fin De Siecle II was first revealed at Whitney in 1989, after which it was transferred to private ownership before being donated back to the museum in 1993. The museum has been working for seven years to restore the artwork.

“Eight technicians and artists were brought in to restore the artwork as close as possible to the original,” said Richard Bloes and Reinhard Bek, conservation specialists who were responsible for restoring the piece.

“We see this as more of a resurrection than a restoration of a 207-screen artwork.”

Paik’s Magnet TV and 70 other artworks by Josef Albers, Jim Campbell, Donald Judd, and others are being introduced at the exhibition.

“Our foundation is happy to contribute to bringing Paik’s artwork back to life at the Whitney,” said Lee Si-hyoung, director of the Korea Foundation.

“We will continue to tell the world about South Korea’s excellence in arts.”

The exhibition will run until April 4 next year. On January 31, the museum plans to hold a special session on the conservation of Fin De Siecle II.