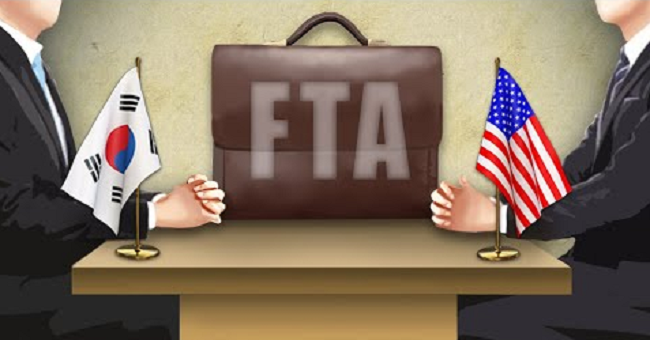 On Wednesday (local time) in Washington, the two sides agreed to begin a process to amend their trade deal. (Image: Yonhap)

On Wednesday (local time) in Washington, the two sides agreed to begin a process to amend their trade deal. Their talks were led by South Korean Trade Minister Kim Hyun-chong and U.S. Trade Representative Robert Lighthizer.

The ruling Democratic Party said serving the best interest of the country should be the top priority in the amendment negotiations.

“We’d like to ask the relevant authorities to put national interest at the top of the priority list,” said the party spokeswoman Kim Hyun. “There may be different types of concerns in different areas in regards to the trade deal amendment, but the national interest should precede everything.”

The main opposition Liberty Korea Party (LKP) echoed the ruling party’s sentiment that national interest must be at the foundation of the trade talks.

But the LKP also took jabs at the government for succumbing to the U.S. pressure to fix the free trade agreement.

“The government had been making excuses and denials, as if a renegotiation wouldn’t happen,” the party spokeswoman Jun Hee-kyung said. “Now, the government must prepare thoroughly to protect our national interest. As the main opposition party, we’ll keep a close eye on President Moon Jae-in and the Democratic Party, and see if they can enhance national interest.”

In accordance with South Korean law, the South Korean trade ministry will carry out the procedures necessary to begin negotiations for an amendment, including an economic feasibility study, public hearings and reports to parliament.