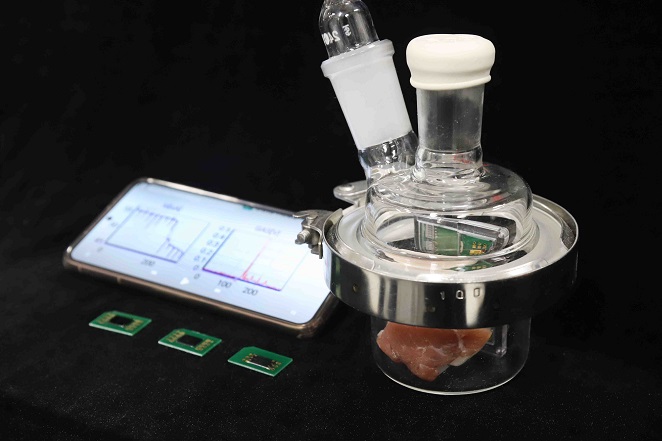 This photo provided by the Korea Research Institute of Bioscience and Biotechnology shows newly-developed electronic nose.

DAEJEON, Jan. 25 (Korea Bizwire) — The Korea Research Institute of Bioscience and Biotechnology said Monday that a research team had developed a portable ‘electronic nose’ that can check whether meat has spoiled in real-time.

The electronic nose can even detect a tiny amount of cadaverine and putrescine, which generate bad odors caused by meat decay.

The research team developed the electronic nose by creating two types of new compounds that can react to cadaverine and putrescine and applying them to a bionano sensor.

The portable electronic nose uses a small battery and features an easy-to-replace sensor.

“The electronic nose can measure not only meat freshness but also provide basic data on the correlation of various factors affecting meat decay, including temperature and humidity,” said Kwon Oh-seok, a researcher at the Korea Research Institute of Bioscience and Biotechnology.

The results of this study were published online in the December issue of the international academic journal Biosensors and Bioelectronics.