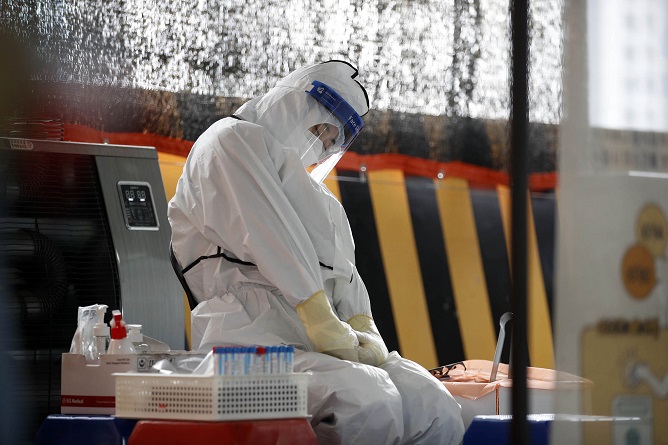 An exhausted medical worker wearing a full protective suit rests at a makeshift virus test center in Gwangju, 330 kilometers southeast of Seoul, on Jan. 24, 2022 in this photo provided by Gwangju’s Buk District office.

The Gyeonggi Provincial government and a research team led by professor Yoo Myung-soon from Seoul National University Graduate School of Public Health conducted a survey of 517 healthcare workers in charge of COVID-19, 48.9 percent of whom were exposed to ‘extreme levels of stress that require immediate attention’, more than double the level reported in previous surveys from May and July 2020.

Asked about various incidents that caused extreme stress in the last 12 months, 37 percent of respondents turned out to be exposed to ‘extreme frustration’.

Among those who have experienced at least one incident that caused serious frustration, 44 percent pointed to ‘malicious complaints’ as a primary cause.

“The employees of public health centers are exposed to extreme levels of stress and frustration, which can undermine their health as well as their work,” Yoo said.