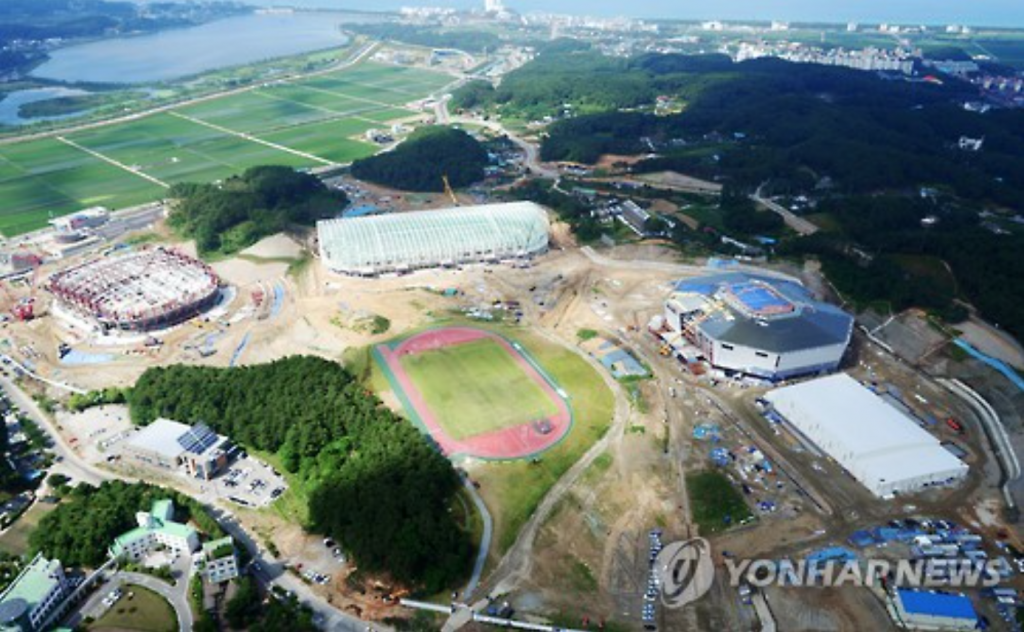 SEOUL, Sept. 26 (Korea Bizwire) – South Korea is on its way to complete venue construction on time as the country aims to make its first ever Winter Olympics an environmentally friendly event.

With the 2018 Winter Games now 500 days away, the South Korea host city PyeongChang, some 180 kilometers east of Seoul, and other two towns in Gangwon Province — Gangneung and Jeongseon — are ramping up their preparations to welcome athletes and visitors from around the world.

A dozen venues — seven for sports on snow and five for events on ice — will be used during the Olympics. Six are being constructed, while six other existing venues will be refurbished for the quadrennial competition.

The PyeongChang Organizing Committee for the 2018 Olympic & Paralympic Winter Games (POCOG) said the six new facilities are, on average, 88 percent complete as of Friday. Jeongseon Alpine Centre, the lone venue in Jeongseon about 20 kilometers east of PyeongChang, is about 73 percent complete, showing the slowest progress among the six new venues, but the organizers said major facilities venues will be completed by the end of this year.

These venues will face real inspections from November to April 2017 as 21 test events will be held during that period.

Construction for non-sports venues is also underway. The Olympic Plaza, where the opening and closing ceremonies will be staged, is about 20 percent complete, and the organizers aim to finish construction by September 2017.

PyeongChang’s preparation is also being carried out under the vision of making “low carbon Green Olympics.”

The organizers estimate some 1.56 million equivalent tons of CO2 are to be emitted during the PyeongChang Games, which is roughly 30 percent of that emitted for the 2014 Sochi Winter Games. According to the POCOG’s “Green House Gases (GHGs) Inventory Report” published last year, it aims to offset 100 percent of GHG emissions by 2025.

In order to reduce GHG emissions, the POCOG is working towards providing electricity to venue cities by organizing a wind plant complex, building facilities to utilize geothermal and solar energy and expanding the use of electric cars. PyeongChang plans to power the Games’ 190 MW of required electricity entirely with renewable energy.

The POCOG also vowed to minimize the damage to Mt. Gariwang, where the alpine ski slope is constructed, and announced it will restore the natural habitat there once the Games end. The organizers said it combined the men’s and women’s courses into one field, the first such attempt at the Winter Games, to preserve more forest area around the course.

For the Olympic legacy, South Korea plans to utilize twelve sports venues and the Olympic Plaza after the Games. Eleven of them already have post-Games usage plans.

The organizers are mulling over using Jeongseon Alpine Centre and Gangneung Oval, a speed skating events venue, as training bases for national team athletes and a leisure complex. The Olympic Plaza is likely to be used as a museum or memorial hall for the Winter Games, adding that the details of the after-use plan will be completed next year.

The National Assembly Special Committee on Governmental Support for International Sporting Events and the PyeongChang Winter Olympic Games on Friday adopted a resolution urging the Seoul government to increase its support in the finance and administrative areas.