SEOUL, Aug. 19 (Korea Bizwire) — South Korea’s real estate agents are beset by enemies on all sides as they are under increasing pressure from both the government and the public opinion to lower real estate commissions.

Consumer complaints are high about real estate brokerage fees, which are set in proportion to a home’s sale price.

Despite the sharp increase in commissions resulting from the recent surge in home prices, the quality of real estate agents’ services remains unchanged.

After the Anti-Corruption and Civil Rights Commission, a state anti-corruption watchdog, presented recommendations to change the real estate commission system in February, the Ministry of Land, Infrastructure and Transport and the Korea Research Institute for Human Settlements have agonized over how to improve the system.

The final draft is scheduled to be released by the end of this month.

Officials at the Korea Association of Realtors, however, claimed that despite the increase in the share of high price transactions, there has been no meaningful impact on the overall revenues of real estate agents.

“Among the nation’s 110,000 real estate agents, 55 percent are simplified taxpayers with their average annual income estimated merely at about 15 million won (US$12,790),” said Kim Kwang-ho, secretary general of the association.

There are two factors behind this situation. First, the number of transactions has declined due to government regulations.

“The number of apartment sale transactions stood at about 500,000 cases in the January to July period of last year. This figure, however, declined by 22.3 percent to 386,000 cases during the same period of this year,” said Yoon Sang-hwa, director of the association. 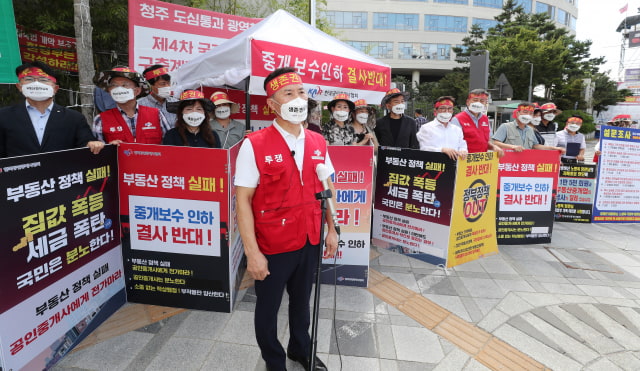 A group of real estate agents from the Korea Association of Realtors rallies at the government complex in Sejong, central South Korea, on Aug. 17, 2021, to voice their objection to a decrease in real estate brokerage fees that the land ministry has been moving forward. (Yonhap)

Another factor is the steady increase in the number of real estate agents.

According to statistics from the Ministry of Land, Infrastructure and Transport, the number of real estate agents in the second quarter of this year totaled 117,738, the highest level in history.

This figure represents growth of 6,722 individuals compared to 111,016 six months ago.

Another cloud that darkens the prospect of real estate agents is the emergence of so-called ‘proptech’ companies such as real estate startup Zigbang Co. that are armed with state-of-the-art technology.

After collecting and analyzing the information on the homes for sale, the proptech companies are using virtual reality (VR) technology to make it easier for consumers to find the homes they want simply through smartphones without the need for legwork.

In particular, these companies are threatening the life of existing real estate agents on the back of low real estate brokerage fees.

As a result, Dawin Property, a real estate brokerage firm which launched in May 2019, saw the number of its monthly site users exceed 100,000 as of the end of July 2021.