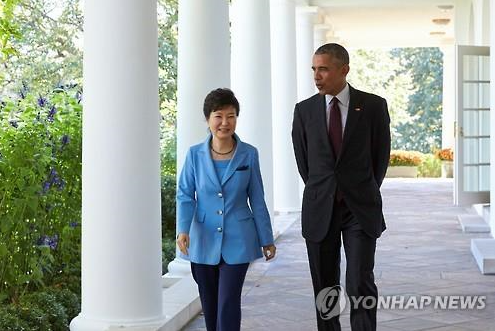 “Some people have argued there was no big issue, but this is because most of the critical bilateral matters such as the transfer of wartime operational control of South Korean troops and cost sharing for U.S. forces on the Korean Peninsula have all been resolved in advance.”

SEOUL, Oct. 25 (Korea Bizwire) – South Korea’s relations with the United States are cruising forward on auto-pilot and this will continue to move forward without interruption, a source at the presidential office said Sunday.

Speaking to reporters, the Cheong Wa Dae insider who spoke on the condition of anonymity touched on the summit meeting between South Korean President Park Geun-hye and U.S. President Barack Obama on Oct. 16.

The two allies agreed to delay the transfer of operational control of South Korean troops held by the United States in wartime, in the face of mounting threats by North Korea. Seoul also pays for part of the upkeep of the more than 28,000 U.S. military personnel in the country.

The official said that with most outstanding issues being resolved, all that remains is to build on such a foundation and upgrade the relationship.

He said the goal of the summit was to tackle North Korea’s nuclear ambition, eventual reunification, and setting new horizons with the United States.

He then said that while there were some unfounded speculations that South Korea has been leaning towards China, such views have been fully dispelled.

“The meeting reinforced the air tight relations that exist between the two sides and mutual resolve to tackle security issues,” he said.