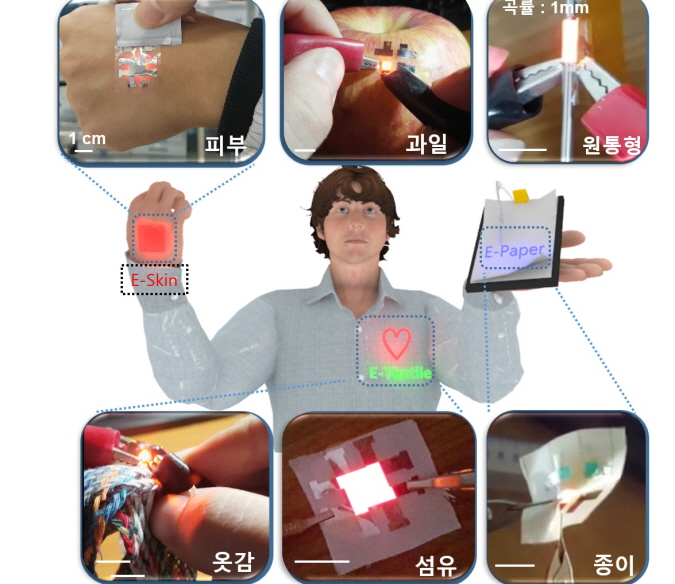 DAEJEON, Dec. 19 (Korea Bizwire) — New technology for an OLED mask that fits closely to the face has been developed by a South Korean research team.

A joint research team from the Korea Advanced Institute of Science and Technology (KAIST) and Seoul National University Bundang Hospital said Wednesday that it has developed a thin and flexible “freeform” OLED for phototherapy.

Although LED mask technology is receiving attention for its role in skin regeneration processes such as healing wounds and improving wrinkles, current LED masks have limitations.

It is difficult to develop LEDs that distribute light uniformly and can adhere to the skin.

The research team has produced freeform OLEDs that can adhere not only to the skin but also to cloth and paper by using displays that are thin, flexible and have uniform light-emitting properties.

The new displays have a sandwich structure, with a thin OLED placed between two layers of thicker film, and can be attached to the surface of various materials as their overall thickness is 10 micrometers.

Thin film layers were manufactured by combining barrier layers, plastics and adhesives that completely seal the display to protect from exposure to moisture and oxygen.

The research team tested the freeform OLEDs on mice that had keratinocyte cells removed and then shone the light on them in 10-minute sessions. The results showed that the cells were 21 percent regenerated eight days later.

The control group without any phototherapy did not regenerate any of the keratinocytes.

In addition, as a result of applying freeform OLEDs to artificial skin models made of human skin cells, the skin that received phototherapy was more than 30 percent thicker than the control group that did not receive phototherapy.

The freeform OLEDs worked normally despite 1,000 repeated folds, and their lifespan was maintained for more than 1,000 hours after washing, the team explained.

“The new OLEDs can be used in wearable devices for phototherapy attached to clothes or hats as well as mask packs for skin beauty and patches for healing wounds,” said KAIST professor Choi Kyung-cheol, who led the research team.