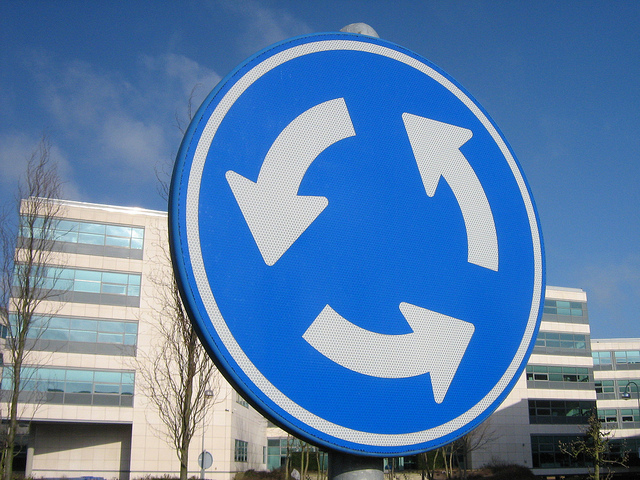 A roundabout, or a circle, is a type of circular intersection or junction in which road traffic flows almost continuously in one direction around a central traffic island and can be seen easily in Europe. (image: DennisM2/flickr)

SEOUL, May 28 (Korea Bizwire) – As roundabouts are proven to speed up the flows of traffic and reduce traffic accidents, the Korean government will expand the circular type of intersections even to major thoroughfares beyond local roads.

The Ministry of Land, Infrastructure and Transport announced that it would investigate the national-level roads which are suitable for roundabouts from the first half of this year and expand them to these roads from next year.

A roundabout, or a circle, is a type of circular intersection or junction in which road traffic flows almost continuously in one direction around a central traffic island and can be seen easily in Europe. Usually entering traffic has to yield to traffic already in the circle.

A ministry official explained that these kinds of roundabouts are different from the traffic circles or rotaries in the past. “In rotaries, as there was no priority to traffic in the circle, entering traffic cut in and caused traffic jams. For that reason, most rotaries were disappeared and changed to signalized intersections.”

The roundabouts were introduced as a way to advance the traffic management in 2010 and built in 364 intersections of local roads nationwide centering on places with higher rates of traffic accidents and traffic jams. In national roads, there are only 10 roundabouts.

With roundabouts, the traffic slows down to pass the intersection, which reduces the possibility of the traffic accidents and the fatality thanks to the slow speed. According to the statistics from the National Police Agency, 43 percent the traffic accidents took place in the intersections. However, the ministry will place the roundabouts with traffic volume of less than 15,000 cars a day centering on two-lane roads as high traffic causes more traffic congestion.

By preparing for the improvements in the existing roundabouts, the ministry will change the design standards for the upcoming facilities. It will also publicize the merits of the roundabouts such as by including traffic tips in the written tests for drivers’ licenses in cooperation with the police.

The ministry official said, “We see 10 percent of the intersections will be transformed into roundabouts in national-level roads. A roundabout is expected to reduce traffic cost of 280 million won thanks to reduced accidents and traffic flow speed-up.”

2 thoughts on “Roundabouts to Be Expanded to Reduce Traffic Accidents”