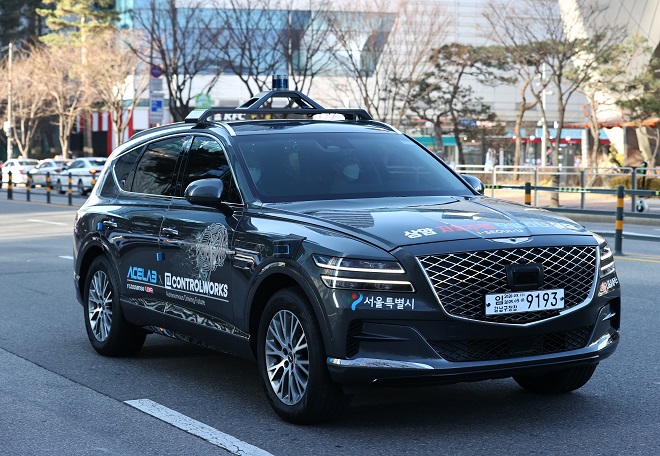 A self-driving vehicle powered by 5G technology developed by LG Uplus Corp. is shown in this file photo taken on Dec. 16, 2020, in western Seoul. (Yonhap)

DAEJEON, May 12 (Korea Bizwire) — The state-run Electronics and Telecommunications Research Institute (ETRI) announced Tuesday that it had developed guidelines for the process that allows a driver to safely accept control back from a self-driving vehicle.

Autonomous driving vehicles with semi-automation systems sometimes require that the driver intervene. Based on various situations, the driver needs to accept control back from the vehicle.

The lack of unified standards in transitioning control, however, has led to a series of limitations as manufacturers came up with different types of implementations.

In response, ETRI developed technology that can assess whether control of the car has been passed on to the driver, and ensure communication between the driver and the car, during various scenarios that can happen during control transition.

For instance, if a driver gets an emergency phone call when the car is entering a non-road environment and should transition to manual control, the guidelines advise the system to monitor the driver’s current status and maintain autonomous driving, allowing the driver some time for transition.

A total of 468 researchers participated in the development of the technology guidelines, carrying out more than 1,500 tests and experiments to complete and reflect various sets of data.