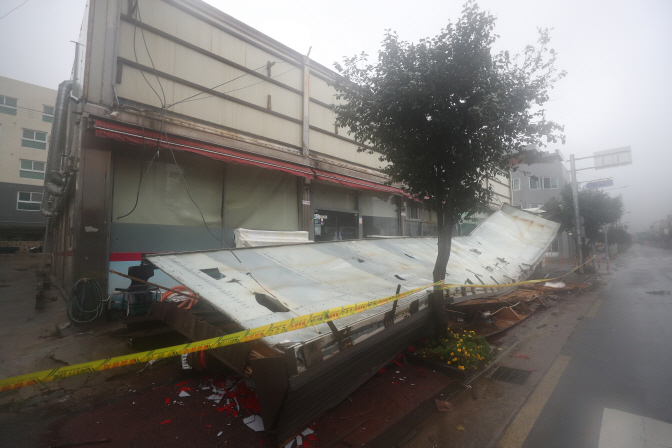 SEOUL, Aug. 23 (Korea Bizwire) — The South Korean government said Thursday it has been preparing emergency measures to minimize damage from Typhoon Soulik, which battered the southwestern region earlier in the day and is forecast to hit other parts of the nation later.

Major ports, farms and utility firms are bracing for Soulik, which is the first typhoon in six years to make landfall on the Korean Peninsula.

This year’s 19th typhoon struck the southern island of Jeju overnight causing heavy rain and gale force winds overnight. It caused a person to go missing and blackouts for more than 6,000 households, according to the Korea Meteorological Administration.

The typhoon is forecast to batter Seoul early Friday morning, which could result in considerable damage during rush hour time.

The oceans ministry said it has ordered vessels evacuated from ports and checked the safety of major ports to minimize damage.

The agriculture ministry has been operating an emergency response team to monitor reservoirs and drainage stations, as well as greenhouses and other agricultural facilities.

Days before the typhoon approached the Korean Peninsula, the government advised local farmers to harvest fruits and vegetables as much as possible to prevent them from falling from strong wind and heavy downpours.

This year’s typhoon is expected to cause greater damage to local farms, which for weeks have grappled with extended periods of hot and dry weather that caused diseases in fruits and vegetables ahead of the harvest season.

The energy ministry called for state utility companies to safely manage major energy and industrial facilities, including nuclear reactors, power plants and gas pipelines, and come up with emergency measures in case of power outages.

As the strong winds hit Jeju Island, about 650 flights have been canceled for two days since late Wednesday, causing inconvenience to some 50,000 passengers, according to industry officials.

Local airlines say they will be able to resume normal scheduled flights after late Friday, when the typhoon moves away from the peninsula.

Local educational offices ordered the temporary closures of schools and kindergartens on Friday as many parts of the nation were expected to be affected by the typhoon.