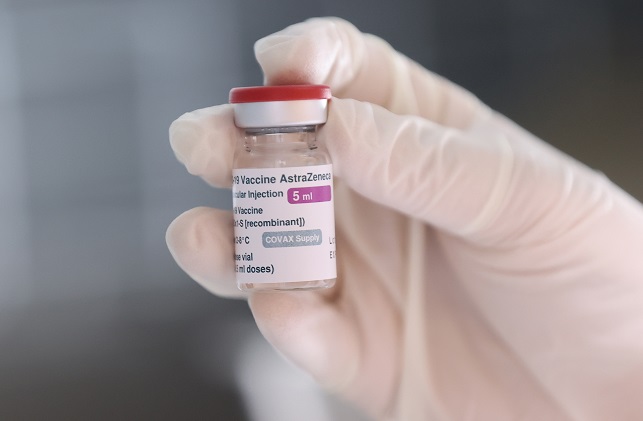 A health worker holds a bottle containing AstraZeneca’s COVID-19 vaccine at a public health center in Seoul on May 3, 2021. (Yonhap)

SEOUL, May 3 (Korea Bizwire) — South Korea said Monday that it will rev up its vaccination campaign by importing more vaccines before June amid concerns over tight supply which caused the nationwide rollout to lag.

Health authorities said the country will receive 14.2 million doses of vaccines in May and June, enough to vaccinate up to 13 million people by end-June.

The country has inoculated some 3.3 million people since its vaccine rollout in late February. A total of 4.12 million doses of vaccines have been shipped in as of Monday.

Health authorities said 7.23 million doses of AstraZeneca’s vaccines will arrive in the country between May 14 and the first week of June, while 5 million doses of Pfizer’s vaccine will be also supplied by June.

Through the World Health Organization’s global vaccine COVAX Facility project, an additional 1.67 million doses of AstraZeneca’s vaccine and 297,000 doses of Pfizer’s vaccines will be imported by June as well, according to the health authorities.

Health authorities said they are currently negotiating with Moderna, Novavax and Johnson & Johnson to import their vaccines in the first half of the year.

The slower-than-expected vaccine shipments raise concerns over the feasibility of the country’s plan to vaccinate 12 million people by the end of June in a bid to achieve herd immunity by November. 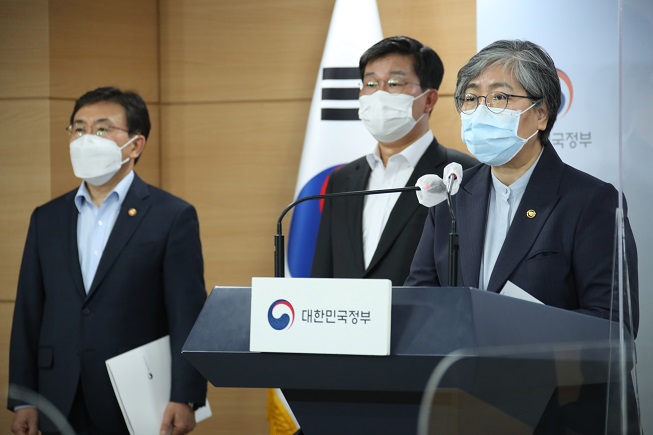 Jeong Eun-kyeong (R), head of the Korea Disease Control and Prevention Agency, speaks, with Interior Minister Jeon Hae-cheol (C) and Health Minister Kwon Deok-cheol standing next to her, at a press briefing on the COVID-19 response in Seoul on May 3, 2021. (Yonhap)

In the latest vaccination scheme, health authorities said they plan to inoculate 8.95 million people aged between 60 and 74.

The country has already been administering COVID-19 vaccines to seniors aged 75 or older from last month.

Health authorities said 191,000 social service workers, including firefighters and police officers, and 452,000 soldiers aged below 30 will be given Pfizer’s vaccine starting in June.

The country has been inoculating social service workers from last week with AstraZeneca’s vaccine, but those younger than 30 were excluded from that vaccination campaign due to the possibility of rare blood clots.

They also plan to hire 3,000 medical workers and recruit more volunteers for vaccination centers nationwide in the first half of the year.