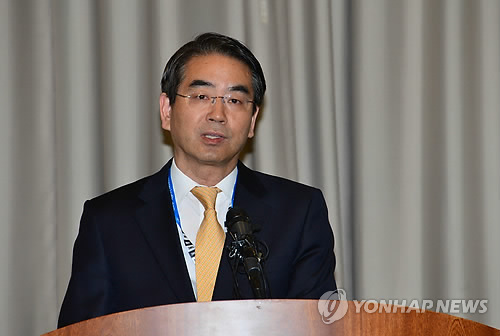 A finance ministry official is briefing the government’s decision on joining AIIB on March 27. (image: Yonhap)

SEJONG, March 26 (Korea Bizwire) – South Korea will join the China-led regional development bank as one of its founding members, the finance ministry announced Thursday, helping bolster the Asian neighbor’s growing clout in the region that is alerting the U.S.

The ministry said the decision to become a member of the Asian Infrastructure Investment Bank (AIIB) has been made with the country’s best interest in mind. The move was anticipated as China is South Korea’s largest trading partner, surpassing the United States, and a key destination for business investments. The two countries inked a free trade pact, and Seoul is striving to become a leading renminbi hub in the coming years.

The new bank will be tasked with providing funds and consulting expertise to economies that want to upgrade their social and industrial infrastructure, which is vital for creating an environment for sustainable growth.

China is expected to foot the bulk of the initial US$50 billion needed to get the bank started, with other members expected to make donations to increase the size of the overall fund to more than $100 billion.

South Korea is seen as wanting to better reflect the country’s interest in the overall ownership of the investment bank and play a role in the drafting of the organization’s charter that is expected to be released in June.

Behind South Korea’s decision on the AIIB were complex diplomatic elements, squeezing Seoul between its decades-long alliance with Washington and the reality of Beijing’s growing influence.

Developed European economies such as Britain, Germany, France and Italy have all announced that they will join the AIIB, with New Zealand following suit.

The move by such countries has upset the U.S., which has been persuading its trading partners and allies to sit out.

Washington raised doubts about the China-led institution meeting the rigorous standards of governance the world has come to expect from the World Bank and Asian Development Bank (ADB). It said the new bank must also be clear on what measures it will take on environmental issues such as global warming and social safeguards like people’s welfare.

Despite such objections, many local economists said that joining the AIIB makes sense for South Korea because local companies, which have competitiveness in the global construction and engineering industries and in the energy sector, will now be eligible to engage in AIIB-funded infrastructure building projects.

While the World Bank and ADB do offer funds, they have in the past come under attack for not responding quickly and effectively to growing infrastructure-related demands in the Asia-Pacific region.

AIIB participants have agreed that voting rights will be commensurate with the contributions made, with Asian countries getting 75 percent of the voting rights and the rest going to other outside partners.

“Joining the organization is the just the start, with the real challenge coming when the country has to secure voting rights that directly impact its role in the bank,” said a finance ministry official, who declined to be identified.