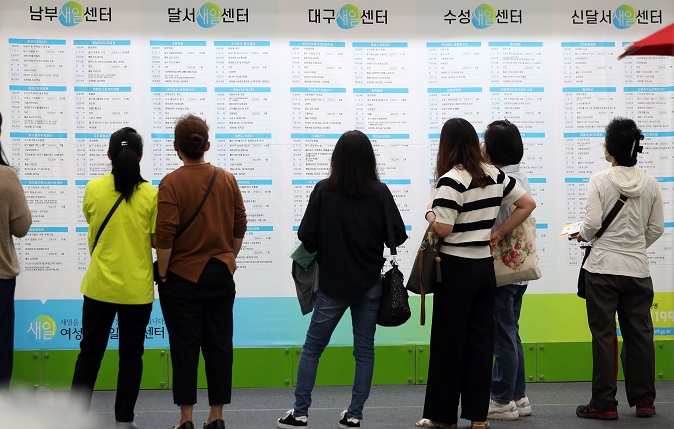 Female jobseekers look at recruitment notices during a job fair at a convention center in the southeastern city of Daegu on Sept. 2, 2022. (Yonhap)

The most recent OECD report on the gender wage gap showed that South Korea had the largest gender wage gap at 31.1 percent, topping the chart for the 26th consecutive year.

Some say that South Korea’s gender wage gap is largely attributed to the country’s unique circumstances, in which men and women engage in different types of jobs.

However, the gender wage gap between those working in the same field and occupation was still one of the highest among all OECD countries.

A report published by the British science journal Nature Human Behaviour showed that the gender wage gap in each occupation in South Korea stood at 18.8 percent, which was the second highest among all 15 major countries.

South Korea and Japan were the two countries with the highest gender wage gap within the same occupation and establishment among all 15 countries.

The date of comparison was different by country. For instance, the comparison for South Korea was made in 2012, and Japan in 2013.

“Under the current wage system, wage increases depend primarily on how long the person works for the company,” said Kim Nan-ju, a researcher at the Korean Women’s Development Institute.

“For many women, their career is interrupted in their 30s due to pregnancy and childbirth, which makes it harder for them to achieve management status.”