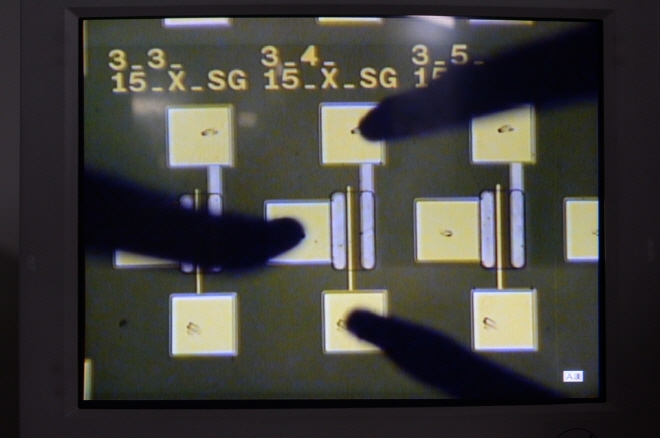 SEOUL, May 15 (Korea Bizwire) — A South Korean research lab said Wednesday that it has developed a new power semiconductor that can be used in a wide range of next-generation electrical devices and power transmission systems.

The new gallium trioxide chip has been tested to have a record-high “breakdown voltage” of 2,300 volts that promises to reduce power transmission losses and help with miniaturization, the Electronics and Telecommunications Research Institute (ETRI) said.

Power semiconductors play a crucial role in turning motors and supplying power to grids, as well as controlling all kinds of electrical equipment, home appliances and vehicles.

The current record is held by the University of Buffalo, which tested a chip that withstood 1,850 volts, with most power semiconductors used today having a limit of about 1,200 volts.

The state-supported institute said the characteristics of the new chip, also called the metal oxide semiconductor field effect transistor (MOSFET), make it ideal for use in devices like high-voltage direct current transmission systems, for handling power from solar cells and wind farms and for powering cars, including electric vehicles.

ETRI said its semiconductor is not only efficient, making it good for the environment, but can easily be mass-produced.

“The chip can be made some 30-50 percent more compact than existing devices despite retaining all the characteristics of power semiconductors,” it claimed.

The institute then said it plans to pass on the production technology, which was featured in the latest issue of U.S. Electrochemical Society journal, to the private sector so a working chip can be manufactured by 2023.

Market watchers, meanwhile, said that South Korea, a leader in the global semiconductor market, is engaged in a tight race with countries like the United States, China and Japan to build better power chips.

The worldwide markets for power chips that will be used in vehicles alone is expected to reach US$8.5 billion, with demand for all gallium-based power semiconductors that can be applied in other sectors likely to hit 703 billion won ($591 million) in 2025.