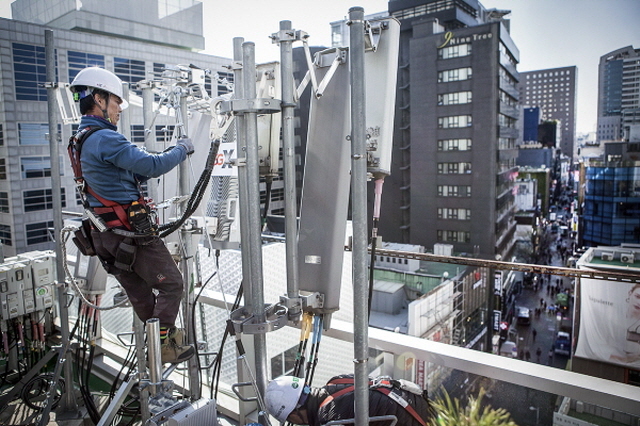 SEOUL, Aug. 8 (Korea Bizwire) — The three major mobile carriers in South Korea are scrambling to install indoor telecommunications equipment to enable the use of 5G networks in buildings later this year.

Since becoming the world’s first to successfully commercialize 5G services, the three mobile carriers have been focusing on expanding the network to cover the entire country by setting up outdoor stations during the first half of this year.

Now, the carriers are planning to move on to installing indoor repeaters to provide quality 5G network services indoors.

5G frequency uses a 3.5Ghz bandwidth, which is higher than the frequency used by LTE network. This bandwidth has stronger straightness, which results in shorter coverage and weaker penetrability.

This has been leading to larger demand for indoor repeaters than for other kinds of networks.

SK Telecom Co. announced on Wednesday that it has established a testbed for cooperation with local device manufacturers within its ICT Technology Center and has completed technological development and final performance checks.

The company is currently testing its 5GX In-building Solution through its commercial network installed at its headquarters in Bundang, and plans to commercialize the network later this year.

“Once the door opens for the era of 5G services, we expect that the 80 percent of all traffic will occur indoors,” said Park Jong-kwan, head of 5GX Labs at SK Telecom.

As of June, KT decided to work with other two mobile carriers to install indoor repeaters at 119 locations, 80 percent of which will be installed by KT.

LG Uplus Corp. also developed its own 5G RF repeater and miniature-sized repeater jointly with DBcomm last month and completed its synchronization with the commercial network.

Now, LG Uplus has begun installation of those devices in small to medium-sized buildings across the country.