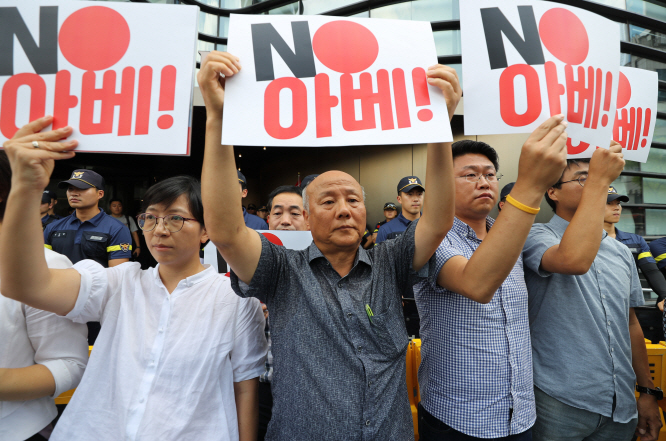 Activists hold a press conference in front of Japan’s Embassy in Seoul on Aug. 2, 2019, to condemn Tokyo’s decision to strip South Korea of a list of trusted trading partners. (Yonhap).

SEOUL, Aug. 2 (Korea Bizwire) — South Korean citizens and civic groups on Friday condemned Japan’s decision to remove their country of a list of trusted trading partners, calling on the Korean government to take an active step to tackle the trade row.

Earlier in the day, Japan’s Cabinet approved a proposal to strip South Korea from the “whitelist” of countries subject to preferential trade status, following its July 4 imposition of export curbs of high-tech materials against the South over a historical issue.

Park Jeong-eun, secretary-general of the People’s Solidarity for Participatory Democracy, a Seoul-based civic group, said that Japan appears to have reset its ties with Seoul with the economic retaliation.

“Despite thorny issues in their shared history, Seoul and Tokyo have closely developed economic ties and sought trilateral security cooperation involving the United States. Friday’s decision signals that Japan will not walk that way,” Park added.

“It is deplorable that our neighboring country Japan is taking a different path from Germany, which apologized for its wartime wrongdoings,” said an office worker in his 30s, who only identified himself by his surname Park.

“I plan to participate in a boycott of Japanese goods more aggressively. I am already not buying Japanese beer and other stuff,” he added.

A 23-year-old college student, who gave only his surname Yoon, stressed the need for the Korean economy to find ways to reduce its reliance on imports of Japanese parts and materials over the long haul.

“We need to explore a long-term plan to reduce heavy dependence on the Japanese economy, not just short-term supportive measures to conglomerates,” he said.

Others also called for the government’s diplomatic efforts to resolve the issue, stressing anti-Japanese sentiment does not help.

“To prevent the Seoul-Tokyo ties from spiraling out of control, President (Moon Jae-in) and the government should be more active,” said Park In-hwan, co-head of the Citizens United for Better Society.