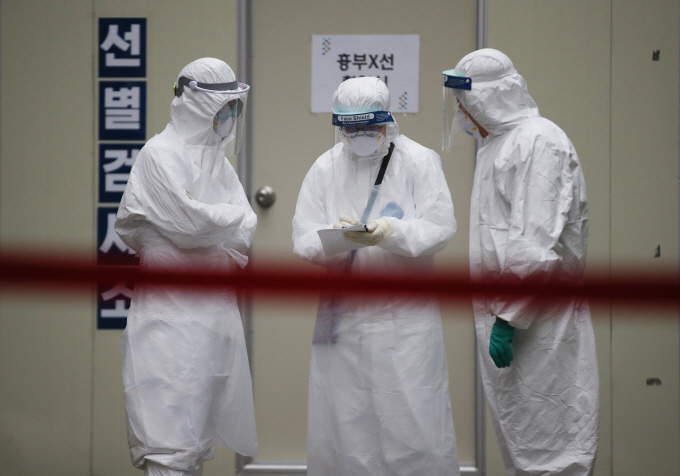 Medical workers in protective gear make preparations in front of a testing facility at a hospital in the virus-hit city of Daegu on March 26, 2020. (Yonhap)

SEOUL, March 27 (Korea Bizwire) — The majority of South Koreans have positive views towards the actions taken by the government, local authorities, medical institutions, and the media against the coronavirus outbreak.

The Korea Press Foundation conducted a nationwide online survey of 1,000 adult men and women, 74.4 percent of whom said the government is taking appropriate measures to fight the coronavirus.

At 94.4 percent, the vast majority of respondents felt they were properly dealing with the coronavirus themselves, while 81.9 percent felt the same way for others. Another 54.1 percent felt similarly towards coronavirus patients.

Many respondents were concerned with increasing mistrust throughout society caused by the the coronavirus (73.2 percent), while 67.6 percent were afraid of infection.

Roughly two thirds of respondents wanted to stay away from infected regions even after the coronavirus situation is over.

In a sign of the times, 92.7 percent of respondents collected information on the coronavirus through internet portals and media websites.

Based on the assessment chart consisting of level of trust, accuracy, speed, depth, and utility of news reports, most respondents had positive views towards terrestrial television broadcasting services (87.9 percent).

Respondents also felt that the media should take extra care when it comes to reporting on coronavirus-related news.

Respondents believed that the media should report on confirmed information, even if it means taking more time (89 percent), rather than making rapid reports on information that has yet to be confirmed (11 percent).

Another 61.3 percent said the media should refrain from engaging in excessive reporting to prevent social anxiety, rather than reporting on as much information as possible to raise public awareness on the upcoming danger (38.7 percent).

At 55.9 percent, more than half of the respondents said the media should respect all measures taken by the government and health authorities, rather than keeping them on close watch (44.1 percent).