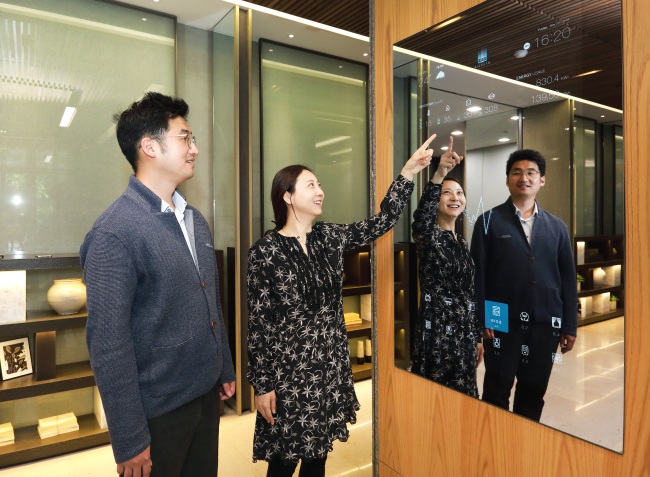 SEOUL, May 29 (Korea Bizwire) — At an apartment complex in Seoul, a woman comes home from the supermarket. As she enters the corridor, an air shower system activates, and fine dust is removed with ease.

Feeling refreshed, she enters the living room. With a wave of her right hand, the curtains are drawn automatically.

“Clean” is her verbal cue that commands the robot vacuum cleaner to move about. The woman enters the kitchen and the lights turn on automatically.

This is not a scene from a science fiction movie; it’s a model exhibit of a “smart home” designed by Samsung C&T’s apartment brand Raemian.

This model home, situated in Munjeong-dong, is gearing up for a public unveil for people to experience living quarters incorporated with IoT technology.

Yesterday, Samsung C&T held a press briefing followed by a demonstration prior to the big public reveal on June 1.

The air-conditioning, automatic massage chairs and speakers are linked to an Internet-based cloud system which analyzes the homeowners’ data.

Based on the data, customized features such as lighting, temperature and air quality will be controlled to suit the needs of the individual’s lifestyle, regardless of age, gender or profession.

A total of 13 companies including Samsung Electronics, Harman, SK, and Kornic came together to create the mock version of the HomeLab.

A senior manager for Samsung C&T says that Raemian IoT HomeLab is not just a conceptual idea, but an actual space featuring technology that will be commercialized in the near future.