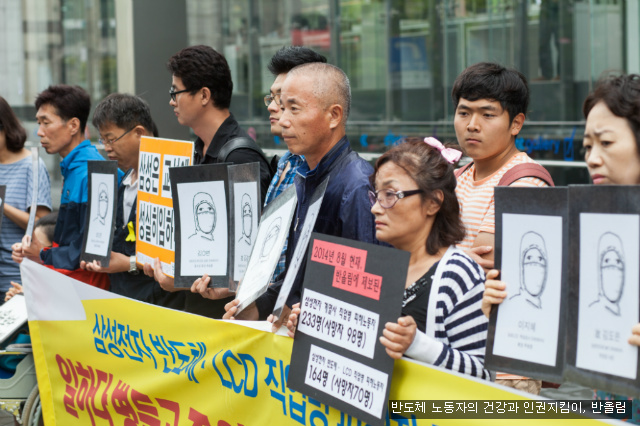 The judges did not admit the cases of the three other plaintiffs.(image: SHARP)

SEOUL, Aug. 22 (Korea Bizwire) – An appeals court judges ruled on August 21 that the causality between the death from leukemia of two former employees in the chip-making plant of Samsung Electronics and the improper safety measures taken by the company may be acknowledged, upholding a lower court’s decision three years ago.

The Protector of Health and Human Rights of Semiconductor Workers (SHARP), an advocacy group dealing with deaths and illness among Samsung Electronics employees, commented on the ruling, “This is a common-sense verdict. We hope the same ruling could be made on all other industrial accident cases.”

The judges, however, did not admit the cases of the three other plaintiffs. To this, SHARP responded, “The judges should have extended the decision to the other three plaintiffs. The current laws that impose the burden of proof on the workers must be revised. We will do our best to bring justice to all victims.”

After the ruling, Samsung Electronics released a statement that it respects the court’s decision and it will try hard to resolve the issue with the families of the victims as early as possible. Since May 28 this year, the two parties have met once in two weeks to narrow the differences.

Earlier this year, the negotiations that lasted more than nine years since Hwang Yu-mi died from acute myeloid leukemia after being diagnosed with the illness in 2005 saw a breakthrough as Samsung admitted its previous mistakes and said it would compensate fully those who died or suffer from illnesses. Hwang died in 2007 at the age of 23. A sixth meeting will be held on September 3 between the company officials and SHARP representatives.