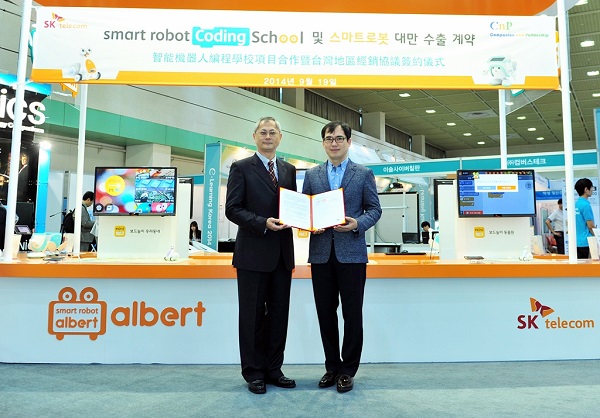 SK Telecom signed an agreement with CnP Advisory International, a Taiwanese appcessory retailer, to export its smart robots and the coding school worth $780,000. (image: SK Telecom)

The telecommunications company announced that it would launch a Smart Robot Coding School, a program for software education by utilizing its smart robots, Albert and Atti.

The operator recognized the importance of education in the course of developing smart robots using smartphones as its brain, which made the company come up with its own curriculum including software programming programs for starters, application use for programming, and smart robots operated by the application.

Computer programming syllabuses have been considered as an effective course in the world for students to improve their logical thinking, creativity and ability to solve problems. The Ministry of Science, ICT and Future Planning in Korea has therefore focused on the software education, announcing its scheme to enhance the computer programming education targeting towards primary and middle schoolers.

The curriculum operated by SK Telecom has 12 steps from the basic stage for beginners to code computer programs by using the application to the advanced level to develop various applied computer programs related to other subjects such as Korean language, music and mathematics.

Aside from the expansion of its domestic software education program, the Korean telecom operator signed an agreement with CnP Advisory International, a Taiwanese appcessory retailer, to export its smart robots and the coding school worth $780,000.

Under the terms of the agreement, SK Telecom plans to sell 3,200 robots and the computer coding program for a Taiwanese version of the school. The agreement with the Taiwanese company is following the agreement with Telefonica, a Spanish leading telecommunications corporation, already operating the education programs in Barcelona and Madrid.