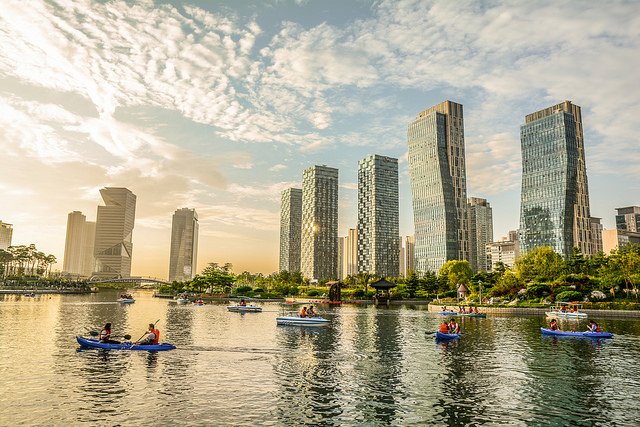 INCHEON, Oct. 4 (Korea Bizwire) – The Songdo International Business District is quickly establishing itself as a new hub for the biotech industry, already housing major pharmaceutical and healthcare enterprises like Samsung BioLogics and CellTrion, and attracting further investment from global firms.

According to industry watchers, GE Healthcare and Merck Group will open new training facilities in Songdo to nurture bio-experts.

Coming first is Merck, a German pharmaceutical and science company, which will open its “M-Lab” Biotech Training Center on October 6.

The center will serve as a training hub for scientific researchers and technicians, and will support Merck’s education and R&D endeavors for biopharmaceutical facilities and technology, which the company provides to domestic firms.

The move is seen as being indicative of the German company’s high regards for growth potential in Korea’s biosimilar sector, according to an industry source, citing Merck as making a bold investment in the Korean market that will become a major consumer of the future.

At the moment, Merck supplies biosimilar equipment to Samsung BioLogics and CellTrion as its major Korean customers.

“It’s a comprehensive decision assessing positively both the large scale production capacity and the potential success of domestic firms,” said the source.

The medical tech company will invest $7.4 million over the next four years to develop what will become a training facility that provides guidance in biopharmaceutical production, manufacturing support, and the nurturing of young bio-experts. It will add to the company’s existing global network of Fast Trak Centers, and will be the first of its kind in the Asia Pacific region.

“South Korea has some of the world’s most innovative biopharma companies, and we look forward to further supporting the growth of the industry here,” said Kieran Murphy, President and CEO of GE Healthcare’s Life Science division.

Meanwhile, another multi-national pharmacist Johnson & Johnson is also considering Korea as a candidate site for its first JLABS to be built outside of North America, and the news is also seen by industry watchers as a sign of positive prospects for Korea’s bio industry.

JLABS is a research platform intended to promote bio-ventures, allowing emerging companies to use its office space, research labs, and equipment for a monthly fee. There are currently six JLABS establishments in the United States and Canada.