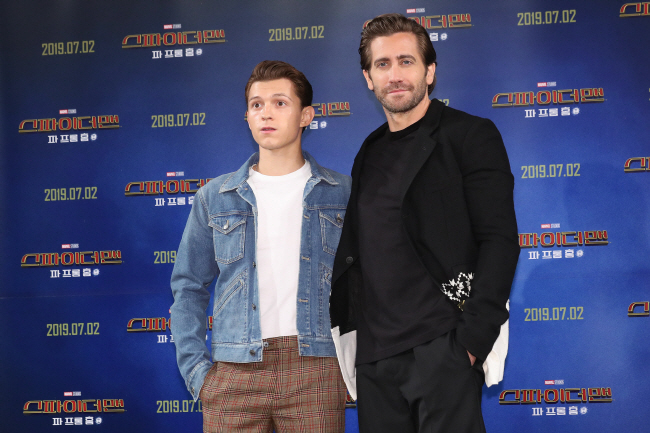 Tom Holland (L) and Jake Gyllenhaal of “Spider-Man: Far From Home” pose during a press conference in Seoul on July 1, 2019. (Yonhap)

SEOUL, Jul. 1 (Korea Bizwire) — Actor Tom Holland said Monday that his character in the upcoming Spider-Man film is an ordinary friendly teenager who grows up to be a superhero and saves the world.

“It’s a film about a young kid growing up and figuring out where he belongs in the world,” Holland said in a press conference held in Seoul a day before the local release of “Spider-Man: Far From Home.”

The latest Marvel movie revolves around the young hero’s adventure in the aftermath of “Avengers: Endgame,” which ended with the death of Iron Man, played by Robert Downey Jr.

“I can never replace Robert. He did incredible things and, I would say, created the most iconic cinematic character of all time,” said Holland, who first appeared as Spider-Man in “Captain America: Civil War” (2016).

“It’s about Peter Parker, Spider-Man, realizing that he needs to step up and fill this void left behind by Iron Man and becomes an avenger,” he said.

Spider-Man is not a perfect hero like other Marvel heroes such as Iron Man, Thor and Captain America, who are a billionaire, god or super soldier, respectively.

He falls in love at first sight and goes on a school trip with friends.

“I think that is what makes him so lovable and relatable. No one in the world, and in our world, is perfect,” he said.

“That’s why people can connect to this version of Peter Parker so much, because they see a little bit of them in him.” 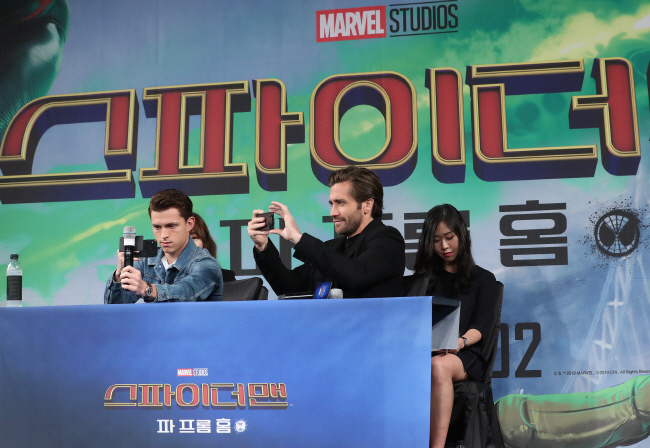 Tom Holland and Jake Gyllenhaal of “Spider-Man: Far From Home” take photos during a press conference in Seoul on July 1, 2019. (Yonhap)

Saying that this is his third visit to South Korea, the Hollywood actor said he is thrilled with the enthusiastic Marvel fans here.

“I think it’s so amazing, Marvel fans in Korea. They made me electric,” he said. “Everyone here is so supportive.”

Jake Gyllenhaal, who plays the character of Quentin Beck, or Mysterio, in “Spider-Man,” said he joined the Marvel cinematic universe as his role is different from the original comics.

In the comics, Mysterio is a major villain but in the movie, he is an uncle-like friend to Spider-Man who struggles with the loss of Iron Man.

“They are comrades and friends. This actually makes a real relationship with Parker and a shared history with him,” said the actor, who appeared in “Okja” by renowned South Korean director Bong Joon-ho in 2017.

“It’s an honor to be not only among these classic characters and all characters that we all love, but also the plethora of incredibly talented actors.”

“Spider-Man: Far From Home” is anticipated to create another Marvel sensation in South Korea, with its presale tickets topping 350,000 as of 3:30 p.m. according to data from the Korea Film Council.