SEOUL, June 29 (Korea Bizwire) — Since her full-fledged solo departure from Wonder Girls in 2017, K-pop songstress Sunmi has taken on striking concepts of feminist empowerment in her summer tracks, from “Gashina” to “Noir.”

For 2020, Sunmi is taking on a totally new facade: a woman hopelessly in love in the early days of summer. “Pporappippam,” which means “purple-hue night” in Korean, is about the heart-pounding emotions one feels when falling in love, according to the singer.

“For me, this is the first true love song. From ‘Lalalay,’ ‘Noir’ to ‘Siren,’ my music largely carried cynicism or ridicule of love,” the singer said Monday at a press conference for her new song at Yes Live Hall in eastern Seoul.

The media event was streamed live on a closed YouTube channel. “Pporappippam” was set to be released at 6 p.m.

Sunmi has again partnered with her long-time collaborator Frants, co-writing the retro-style city pop number with the producer. As usual, Sunmi was in charge of the lyrics.

Conceptually and musically, “Pporappippam” is in many respects an unapologetic summer party song, with the music video saturated in a purple hue filled with imagery of young partiers having a blast around a beach bonfire with fireworks, without the usual biting commentaries associated with Sunmi.

The singer said she had something else in mind when initially working on the album. But amid weighty recent real-world incidents, such as the COVID-19 pandemic, Sunmi said she wanted to deliver a sense of relief and escapism to her fans.

“Honestly I was working on a different song as the title song. Then I had the realization, that everyone nowadays were going through difficult times emotionally, with stuff weighing down on their hearts,” said Sunmi.

She added, “My songs largely had a weighty feel in the past. I wanted to deliver as sense of emotional relief to fans. ‘Pporappippam’ is such a heart-pounding song.”

“That feeling during early summer, of the breeze that dries away the sweat near dusk. That sense of excitement when you’re watching the sky while sitting at an outside terrace cafe. I wanted to sonically create that,” Sunmi said. 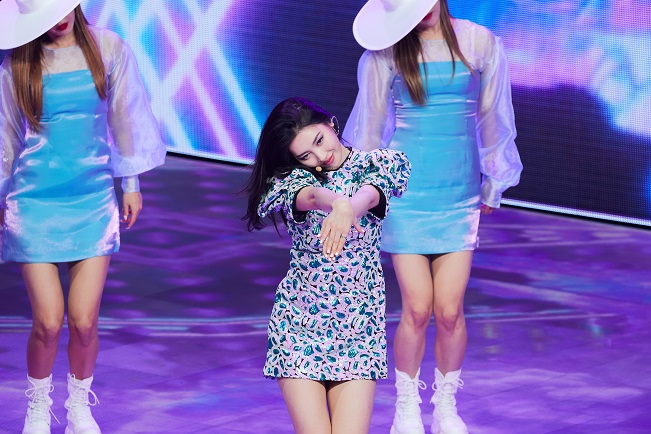 As of now, Sunmi remains a largely uncontested icon in the solo female K-pop dance scene, with many up-and-coming newbies citing her as a career role model.

Sunmi said her biggest advice to new comers to K-pop was to “geek out” to yourself as much as possible — as in becoming your very own super fan.

“I did always ponder becoming a role model to someone else. I’m grateful that many newcomers consider me their role model, relieved from the fact that I’ve been doing fairly okay.”

Sunmi elaborated, “From the start, I wasn’t really someone that stood out. Since my solo debut, the most frequent advice I made during interview was people to geek out at themselves. I think that resonated a lot from younger artists.”

“I don’t think results can turn out well if you don’t have pressure. I always think that one has to have pressure. If you think about it, I think being asked about whether I have pressure is a sign that I’ve doing well so far,” Sunmi said.